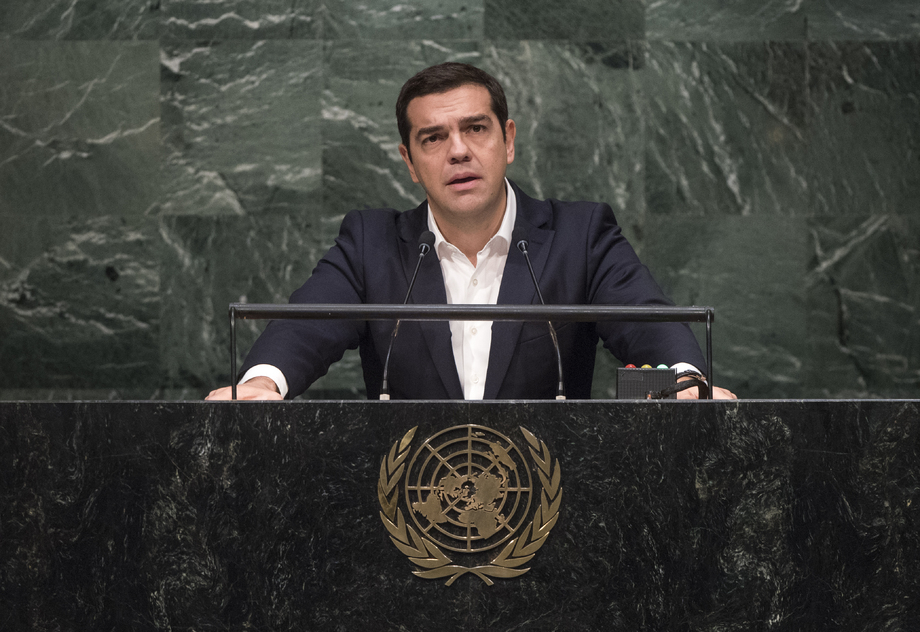 ALEXIS TSIPRAS, Prime Minister of Greece, said that his country had been hard hit by the 2008 economic crisis due to the structural weaknesses of its economy and its high debt and budgetary deficits.  Yet the neoliberal recipes that Greece and other European countries were called to implement came at a devastating social cost, and continued to deepen the economic and fiscal crisis instead of curing it.  Greece lost 25 per cent of its gross domestic product (GDP), its debt to GDP ratio grew to 180 per cent, unemployment reached 27 percent, and the migration of graduates to European countries accelerated.

After many months of negotiation, he continued, Greece had agreed to a new stabilization program that included reforms to its public administration, pension and tax system, which gave it the opportunity to stabilize the economy by setting the foundation for a re-profiling of its debt.  Unfortunately, such actions imposed measures that further burdened both society and the economy.  His country needed to struggle step by step to claim a growth agenda, rather than one of austerity.  The development of the economy and the restoration of confidence must be linked to the need for restructuring Greece’s debt.

Greece was also at the forefront of another regional, European crisis, namely the recent unprecedented migration flows, he pointed out.  Since the beginning of the year, over 300,000 people, mostly from Syria, Iraq and Afghanistan had entered the country with the aim of transiting to Western European countries.  Greece, like all other European countries, was taken aback by that development.  Nevertheless, the people of Greece had shown their solidarity by providing food and shelter to the refugees.  The future of Europe or the world could not be built on ever-higher walls, or children dying on the doorstep.  The international community could not allow racism and xenophobia to destroy its common principles.

In addition, he said, Greece was at the heart of a security crisis due to refugees coming from Ukraine to the north, and the conflicts in Libya and the Middle East to the south-west and south-east.  He called for the international community to act decisively in favour of reconciliation and a political solution for Syria and voiced support for United Nations efforts and welcomed the successful completion of negotiations and political dialogue last week in Libya.  He also stressed the importance of territorial integrity, independence and sovereignty within Ukraine’s internationally recognised borders.  More so, for its own part, as a regional player keen on promoting security in the area, through a range of initiatives Greece had been making steady efforts to improve cooperation with Turkey.

Around the globe, people were striving for a better future for them and their children, he said.  People in his own country struggled every day, with pride and dignity, to overcome crises and regain hope.  Even in their most difficult moments they were assisting those more in need; those fleeing conflict zones.  That was a daily example of people insisting, even under the most difficult conditions, on their basic humanity and democratic rights.  That example should guide the world in taking the necessary steps towards a safer, just and more prosperous world, currently and for future generations.