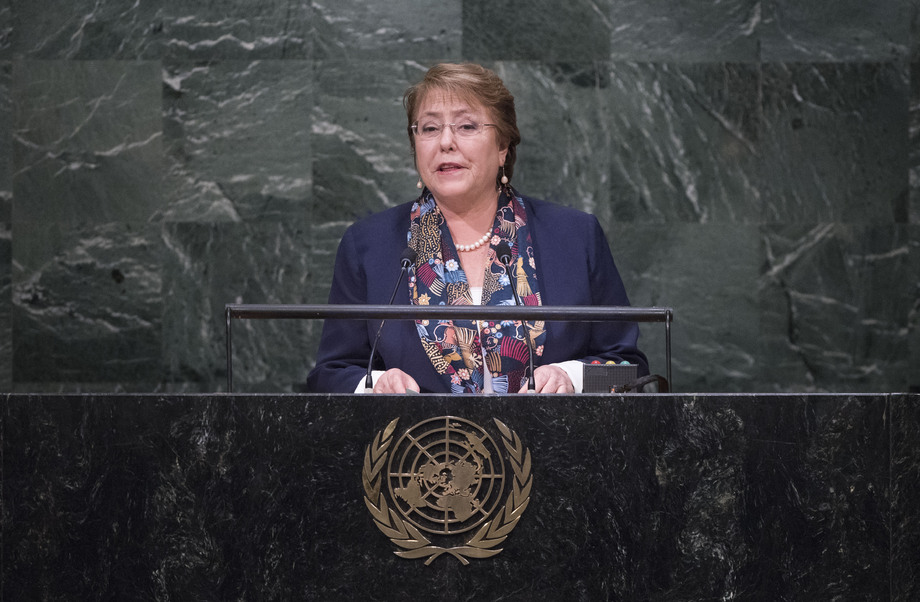 MICHELLE BACHELET JERIA, President of Chile, said a conjunction of serious crises in various parts of the world had made the international community duty bound to react with solidarity to restore peace and security.  Expressing appreciation for the efforts many countries had made to take in the ongoing flow of refugees, she said more needed to be done.  Chile had decided to take in refugees from the civil war in Syria and would expand cooperation with Africa.  From 2016, it would participate in United Nations peacekeeping operations in that region.

In addition to tackling the most urgent challenges to peace, the planet had yet to stem growing inequalities and reach an agreement on halting global warming, she said.  The seventieth session of the General Assembly, which adopted the 2030 Agenda, would go down in history as an important moment.  The primary responsibility for sustainable and more equal development rested with individual countries.  However, that endeavour required a favourable environment, since many of the targets were affected by global dynamics.  For that reason, the challenges the world faced today could not be resolved by each country in isolation.

Ms. Bachelet said that a basic prerequisite for making the Agenda was to strengthen the system of global institutions and multilateral cooperation, with broad representation, clear mandates and effective tools.  As a non-permanent member of the Security Council, Chile reaffirmed its belief in the need to increase the number of permanent seats and reduce the veto, at least in cases of crimes against humanity.

Agenda 2030 gave a shared horizon, she said.  Each country must act individually but at the same time cooperate with various North-South and South-South forums and tackle global challenges jointly.  Congratulating Cuba and the United States for establishing diplomatic relations, she applauded the use of dialogue and respect for international law as the civilized way for countries to resolve their differences.