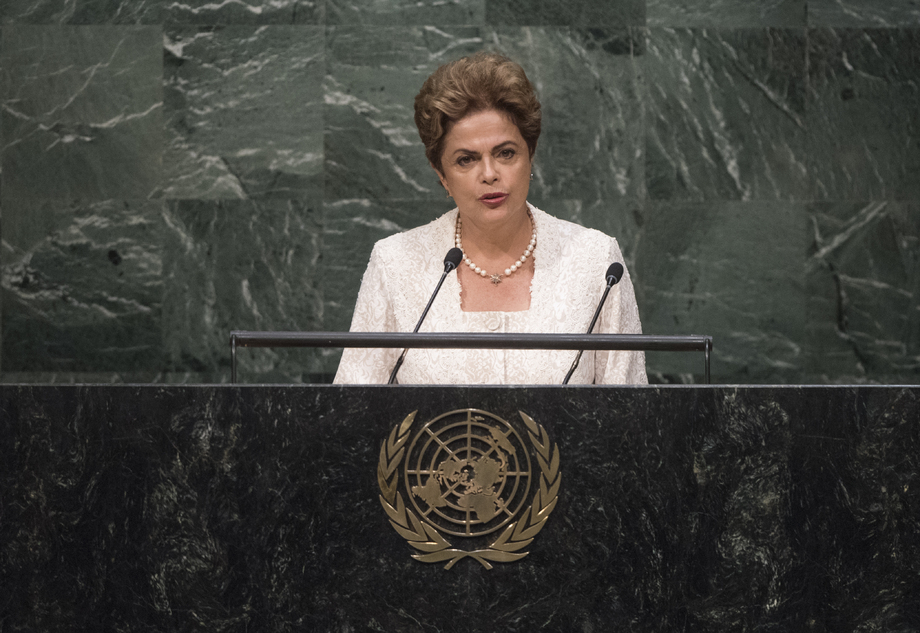 DILMA ROUSSEFF, President of Brazil, opening the general debate, said that while the United Nations had broadened its initiatives since its founding 70 years ago, it had not had the same success in addressing collective security, an issue present at the Organization’s origins and which remained at the centre of its concerns today.  The proliferation of regional conflicts — some with destructive potential — as well as the expansion of terrorism were indicative of the Organization’s great challenge.

The profound sense of indignation felt around the world caused by the picture of a dead Syrian boy on the beaches of Turkey and by the news of the 71 people asphyxiated inside a truck in Austria must be translated into unequivocal acts of solidarity, she urged.  As a hosting country, Brazil had received Syrians, Haitians, men and women from around the world, just as it had sheltered millions of Europeans, Arabs and Asians, over a century ago.

Today’s worrisome backdrop required swift and decisive action, she said, adding that the creation of a Palestinian State, for example, could no longer be delayed.  The Security Council must be expanded in its permanent and non-permanent categories so to make it more representative, legitimate and effective.  Welcoming the establishment of diplomatic relations between Cuba and the United States, she expressed hope that the process would culminate in the end of the embargo.

Turning to the 2030 Agenda and the Climate Change Conference in Paris in December, she said her country was making a significant effort to reduce greenhouse gas emissions and continued to diversify the renewable sources in its energy mix, invest in low-carbon agriculture and reduce deforestation in the Amazonian region.  Brazil was one of the few developing countries to have committed to an absolute goal for emissions reduction.  It had made significant efforts to eradicate poverty, evidenced by its graduation from the World Hunger Map.  It had also undertaken initiatives to reorganize its fiscal situation, while continuing its process of social inclusion in a democratic environment.