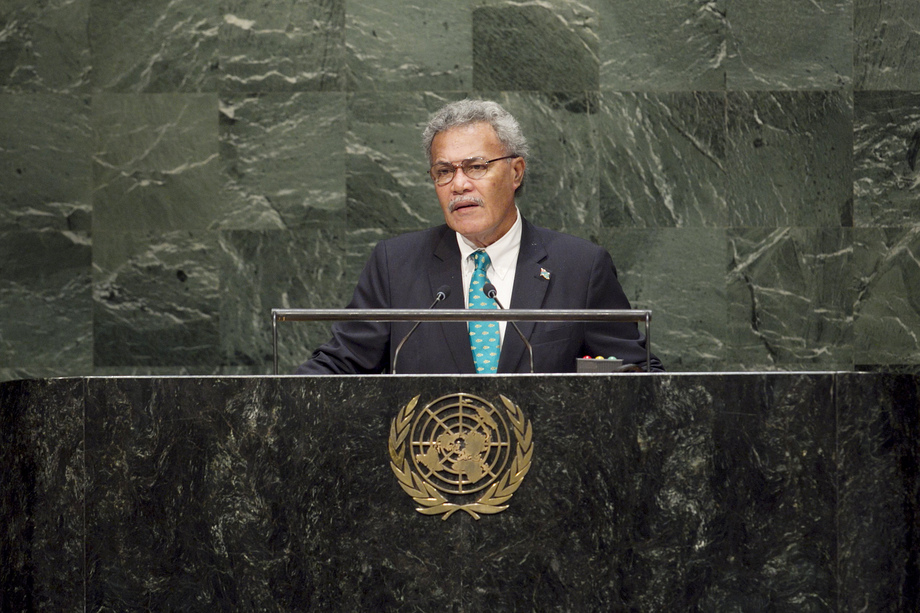 ENELE SOSENE SOPOAGA, Prime Minister of Tuvalu, noting his country was celebrating its thirty-sixth anniversary of independence next week, said his country was proud and committed to be a Member State of the United Nations.  However, he voiced sadness for the loss of lives and suffering of fellow human beings from crises the world over.  Such losses, due to terrorism, poverty and environmental degradation, Ebola, as well as political conflicts in the Middle East and Ukraine, were disturbing.

He said he wondered if leaders "really cared", and if they meant what they said inside the General Assembly Hall.  A kindergartener recently asked him, "do we have a tomorrow, and can you save us?"  Yet, he had mixed feelings.  He was encouraged by the Climate Change Summit, but discouraged by the deniers of climate change.  The world must not be distracted by those deniers, but must focus on a strategic and pragmatic approach.

There was a lot of talk within the United Nations about creating a post-2015 development agenda, he observed, stressing that diverse circumstances and needs of the United Nations membership should be taken into account in its development.  The Organization must also improve its presence, particularly in vulnerable States, as global realities affected even the farthest, most remote island countries like Tuvalu.  The dedication of this year as the International Year for Small Island Developing States had concluded in many constructive partnerships to address the special needs of those States.  Commending those efforts, he also believed that the ultimate measure of success was the delivery of tangible actions on the ground that reflected and accommodated each unique and special place.

Juxtaposing Tuvalu's 24 square kilometres of land against its 900,000 square kilometres of the Pacific Ocean, he said the sea had always been the "lifeline" for food and economic growth for his people.  The United Nations should honour the health of the ocean, as it was the earth's life support system.  The seriousness and urgency of actions needed to combat climate change had also been echoed by youth leaders in the General Assembly.  Tuvalu was experiencing unprecedented life-threatening impacts from climate change.  At only two to three metres above sea-level, his country's security and the future human rights of its citizens was being seriously compromised.  Calling for the international community to take action to halt climate change, he stated, "Do it.  Save us."