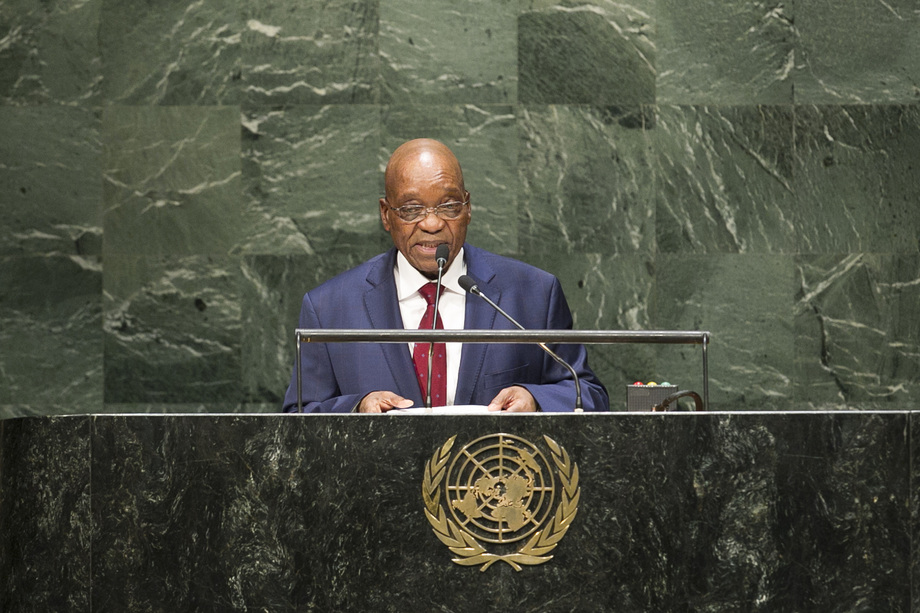 JACOB ZUMA, President of South Africa, welcomed the theme of this year’s general debate “Delivering on and Implementing the Post-2015 Development Agenda’. Africa had made significant progress since it had implemented the Millennium Development Goals 14 years ago, and in that period, it had seized the opportunity to adopt the New Partnership for Africa’s Development (NEPAD), the continent’s “socio-development blueprint”.  Together with NEPAD and other such development programmes, the African Union’s vision for 2063 will be the cornerstone and foundation of Africa’s future development agenda.

South Africa had made significant progress in achieving the Millennium Development Goals, he said, noting that the number of people earning less than a dollar a day had been halved, as had as those experiencing hunger.  His country had also attained Goal 2 — primary education for all — and was on its way to achieving Goal 3 — promoting and empowering women.  Progress had been achieved through the expansion of health infrastructure and improved access to health services for all South Africans.  Despite that, reports continued to show that the continent was lagging behind.  For that reason, the post-2015 agenda must carry forward the “unfinished business of the [Millennium Development Goals]”.  He called on developing countries to contribute 0.7 per cent of their gross national income towards ODA.

Putting aside everything that the United Nations had achieved in the past six decades, he said if we do not deal with the scourge of poverty, underdevelopment and diseases, “the poor of the world will consider everything to have been a failure”.  The outbreak of Ebola in West Africa was a clear example of the persistent challenges for developing countries.  The outbreak had exposed constraints in capacity, infrastructure and other limited resources in Africa.  Still, he praised the leadership of Secretary-General in deploying a mission to coordinate efforts to combat the virus and affirmed that South Africa stood ready to provide resources at its disposal to assist the affected countries.  More, however, were should be deployed to ensure the containment of the virus.

He voiced South Africa’s support for the quest for freedom and self-determination, including by the peoples of Palestine and Western Sahara, who continued to experience occupation in different forms.  Further, his country supported Cuba’s struggle for economic liberation because of its sacrifice for African freedom.  The Israeli-Palestine question was one of the oldest items on the United Nations agenda, and yet it remained elusive.  As there could be no military solution, the international community must remain committed to a two-State solution based on the 1967 borders and a peaceful coexistence with Israel.