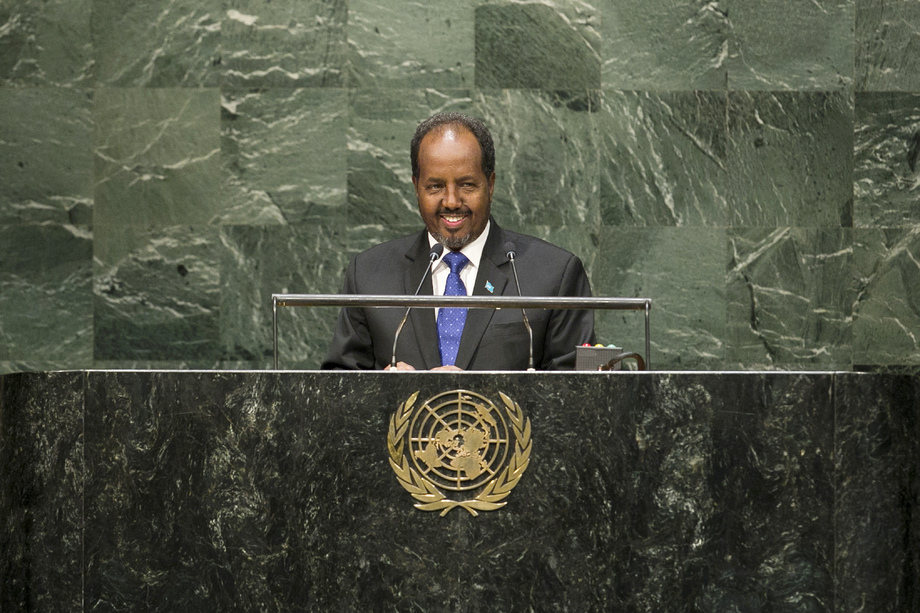 HASSAN SHEIKH MOHAMUD, President of Somalia, said his country was no longer a country of war, piracy, extremism, famine, droughts and floods.  It would no longer be known through films like Captain Philips or Black Hawk Down.  Focusing on such descriptions meant missing "the beauty of a very different picture that we are painting right now in Somalia", he said, adding that his country "may still be fragile, but we are no longer broken".

A new Government had been established in September 2012, he said, pointing to the national consensus that underpinned it and the unanimous recognition it enjoyed in the international community.  The Government faced many complex challenges, including a lack of resources and only very basic institutional and Government structures.  The country was divided, without a clear path to unification, and Al-Shabaab controlled a lot of territory.  Meanwhile, there were high expectations about security, political inclusivity, health, education, private sector development and basic economic reform.  Nonetheless, the future’s foundation was being laid through the clear military defeat of Al-Shabaab by the joint efforts of the Somali National Army and the African Union mission.  More than 70 per cent of south and central Somalia was now under Government control.

The Government’s focus was on "building a foundation and laying down the groundwork for stabilization and ensuing reform", he said, describing progress in legal, political, financial, economic and social fields.  Somalia had cemented its place in the international community, strengthening relations with its neighbours and establishing forums for dialogue.  Key financial institutions were being established to provide accountability and control, and he was heartened by the progress "from failed State to a nascent, functioning State".  It was vital to stay the course, however, and Somalia was at a critical point in achieving stability and security.  Terrorism was rising around the world, but Somalia had significantly advanced its fight against the scourge.  Military solutions were not enough and dialogue, reconciliation and forgiveness were the tools needed for peacebuilders and nation builders.

He noted the strategic location of Somalia as the gateway between the Arabian peninsula and the African continent.  Defeat of Al-Shabaab could not be met with other extremist groups finding fertile ground in the country.  Somalia needed to be strengthened to prevent another invasion by violent extremists who spread an ideology of death.  People had to be allowed to determine their own future and to benefit from proper application of the rule of law and human rights.  Vision 2016 aimed to deliver peace and sustainable security, outlining federalism through reconciliation, adoption of a revised permanent Constitution and the path to elections.  Noting progress made, including completion of the Constitution Review and Implementation Commission, adoption of the Provisional Federal Constitution and work to create a Boundaries and Federation Commission and National Independent Electoral Commission, he said "we must not fail to deliver on our ambition".

The Somali National Forces had been an important component to defeating Al-Shabaab, he stressed.  The humanitarian situation remained critical, though, with 3.2 million needing immediate assistance and conditions approaching the seriousness of the horrific famine of 2011.  A million people were displaced and a sustained and scaled-up response was required to prevent “free fall”.  The humanitarian appeal remained underfunded, receiving only 32 per cent of what had been requested.  With such recorded progress, it was vital to address the problem; otherwise, those many gains could be eroded.  Continued success required international support, alongside the commitment and ownership of the Somali people.  “This is not the time for scepticism,” he stated.  Democratization and reconciliation would be reached through dialogue, inclusive politics and building of a shared vision on the country's future.