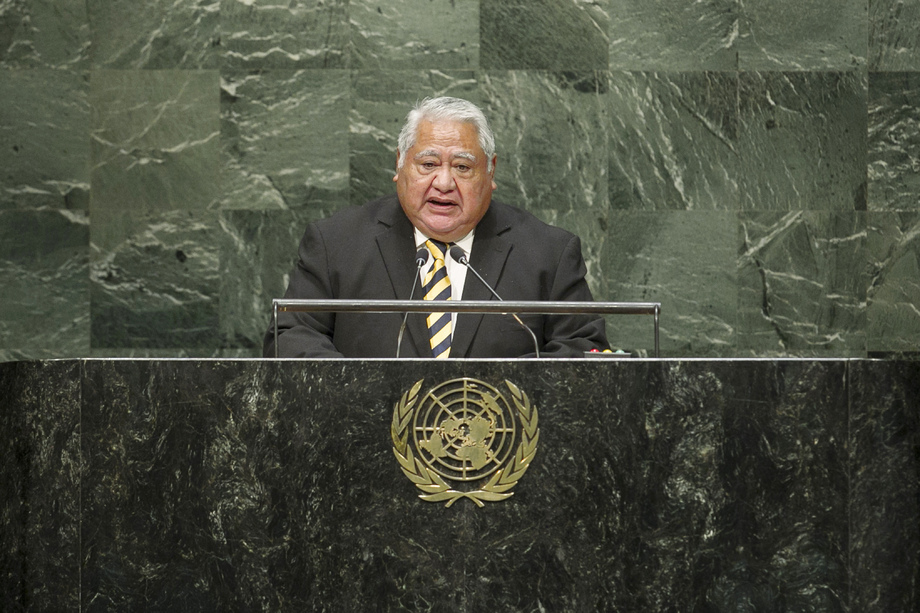 TUILAEPA SAILELE MALIELEGAOI, Prime Minister of Samoa, said that climate change was an urgent crisis, which dwarfed all others.  Its victims could be rich or poor countries, big or small, he said, rejecting the view that its implications were looming in only certain State.  He rebuffed complacency by any country, saying all must work together as “a single constituency”.  Time was slipping away, and the international community would be soon playing catch-up.  Upcoming Lima and Paris conferences on climate change offered the best opportunity for the world to save itself.  The recent summit had been timely and its message clear: without action, the situation would worsen.  Climate change was a societal problem, which required political will and a societal response.  Also vital was to find a global solution, and the United Nations represented the best hope for doing so, he said, stressing the importance of reaching a post-Kyoto agreement.

Turning to the Ebola outbreak in West Africa, he said the crisis respected no national borders, indiscriminately claiming victims.  Samoa was among the 134 co-sponsors of a Security Council resolution on the spread of the virus.  Council action had been followed by a General Assembly resolution to establish a United Nations Mission for Emergency Ebola Response.  That was a powerful demonstration of what could be achieved when nations united.  That spirit of cooperation should prevail when dealing with other critical issues.  On extremism, he said that phenomenon seemed so far removed from Pacific island States, but due to global interconnectedness, those States could be exposed to risks as well.

The United Nations had been founded on collective security, he said, describing that principle as important to small islands, whose development gains could be erased by security events.  Small island developing States needed the United Nations special attention owing to their inherent challenges, which were outside their control.  Three weeks ago, his nation had hosted the third international conference on small island developing States (SIDS), successfully casting a global spotlight on their issues, which should be forgotten with the passage of time or overshadowed by other competing issues.  The follow-up to the meeting’s outcome was on the General Assembly’s agenda for this session.  The outcome text, known as the Samoa Pathway, asked the Secretary-General to undertake a comprehensive review of how the United Nations could best support small island developing States.  “We may be small and invisible, but a united SIDS is strong,” he declared, underscoring that implementation of the Samoa Pathway must be solidly entrenched in the post-2015 development agenda.