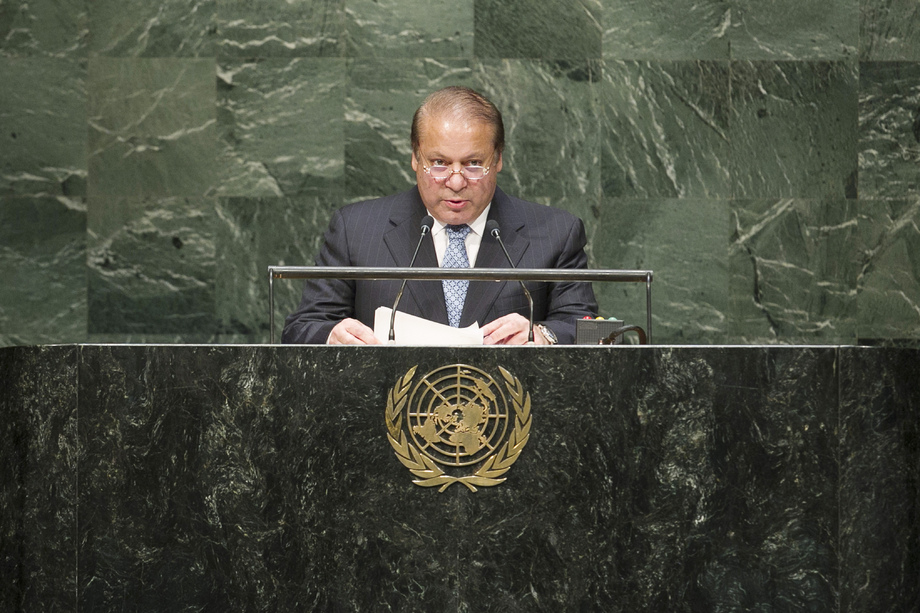 MUHAMMAD NAWAZ SHARIF, Prime Minister of Pakistan, said that extreme weather was disrupting world economies, particularly in developing countries.  Recent monsoon floods in his country had killed hundreds of people, displaced millions, and destroyed and damaged homes, livelihoods, infrastructure, cattle and crops.  The Government was mobilizing all its resources and ingenuity to provide relief and ensure recovery.  He called on the international community to intensify its efforts to move from awareness to commitments on actions addressing climate change.

Pakistan had launched its “Vision 2025”, which put people first, he said.  In the coming decade, it would develop human and social capital through investment in education, health and gender parity; stimulate sustained economic growth; prioritize energy, water and food security; modernize the public sector; and encourage sector-led entrepreneurship.  His Government would also pursue a policy of constructive engagement and remain engaged in the dialogue process needed to settle disputes and build economic and trade relations.

More than six decades ago the United Nations had passed resolutions to hold a plebiscite in Jammu and Kashmir, he said.  However, the people there were still waiting for the fulfilment of that promise.  Many generations of Kashmiris had lived under occupation, accompanied by violence and abuse of their fundamental rights.  It was the responsibility of the international community to resolve the issue of Jammu and Kashmir, he underscored, reaffirming Pakistan’s readiness to work for a resolution of this problem through negotiations.

Afghanistan was going through momentous security, political and economic transitions, he continued, voicing hope that these landmark processes would result in a stronger, more stable and unified country.  Condemning terrorism in all its forms and manifestations, he called on the United Nations to facilitate a just and lasting solution of the Palestinian issue.

As a responsible nuclear weapon State, he said, Pakistan would continue to support the objectives of nuclear disarmament and non-proliferation, and pursue a policy of nuclear restraint and credible minimum deterrence.  To promote stability, it was prepared to explore new confidence-building measures, he added.  He also said that, in regard to the reform of the Security Council, there should be no new permanent seats on it; instead, the body should become more representative, equitable, accountable and transparent.