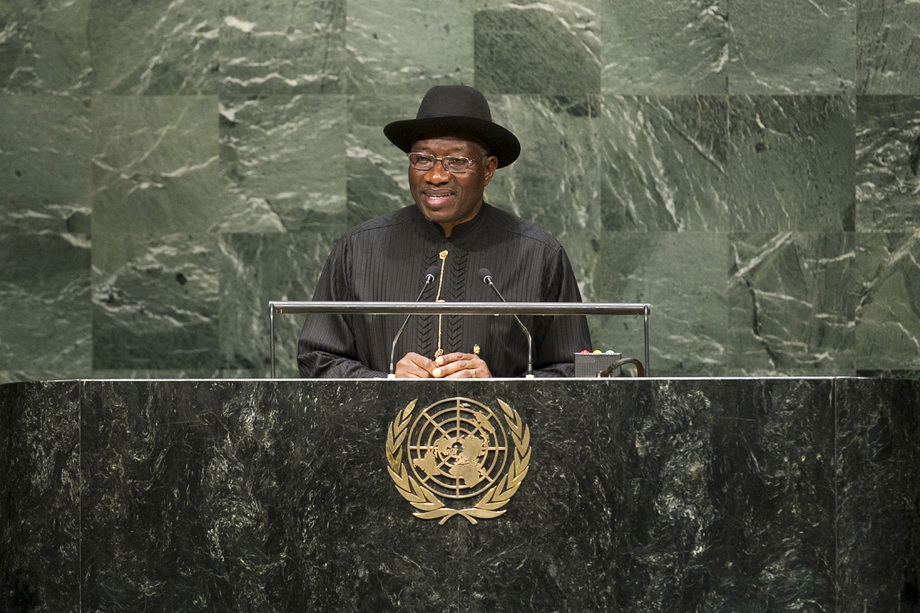 GOODLUCK JONATHAN, President of Nigeria , stressed that the post-2015 agenda requires collective ownership and should meet the aspirations of developing countries.  Noting that his country was co-chair of the report on sustainable development by the Intergovernmental Committee of Experts, he said that Nigeria would strengthen governance and institutions to ensure the efficiency of resources and create an “enabling environment for rapid development”.

However, he said, the consequences of terrorism were “extremely agonizing”.  From Al Qaida in the Maghreb and Al Shaabab in Somalia, to Boko Haram in Nigeria and the newly emerging “Islamic State”, foreign fighters had remained a common feature.  The destructive ideology of those groups was a major challenge that must be collectively halted.  The current tools of peacekeeping operations needed to be reviewed, he said, recalling the activities of Boko Haram in Nigeria and its repeated assassinations, bombings and kidnappings, as well as the large-scale abduction of school girls in the north-east of the country.  He thanked all countries and organizations for their continued support and assured the Assembly that his country was working “assiduously” to free the girls.

Turning to Security Council reform, he stressed that today’s challenges could only be resolved by a Council whose working methods promoted transparency, inclusivity and common ownership through equitable representation of all regions.  That process should be fast-tracked and would require the collective resolve of all Member States to ensure that 2015 — the fiftieth anniversary of the last significant reform — would bring about decisive progress.

As the African continent battled conflicts and terrorism, the region had also been devastated by the outbreak of Ebola, he continued.  With the help of the World Health Organisation (WHO) and other international partners, Nigeria had been able to control the disease’s spread.  The situation in Liberia and Sierra Leone, however, required collective global action.  Nigeria had donated $3.5 million and had provided training and capacity-building to support the three affected countries.  He urged the international community to avoid “indulging in isolationist and discriminatory tendencies” that would worsen an already critical situation.

Highlighting the role of the United Nations in finding solutions to all of those challenges, he reiterated his country’s commitment as a partner in working collectively to tackle new and emerging threats to global peace and security.