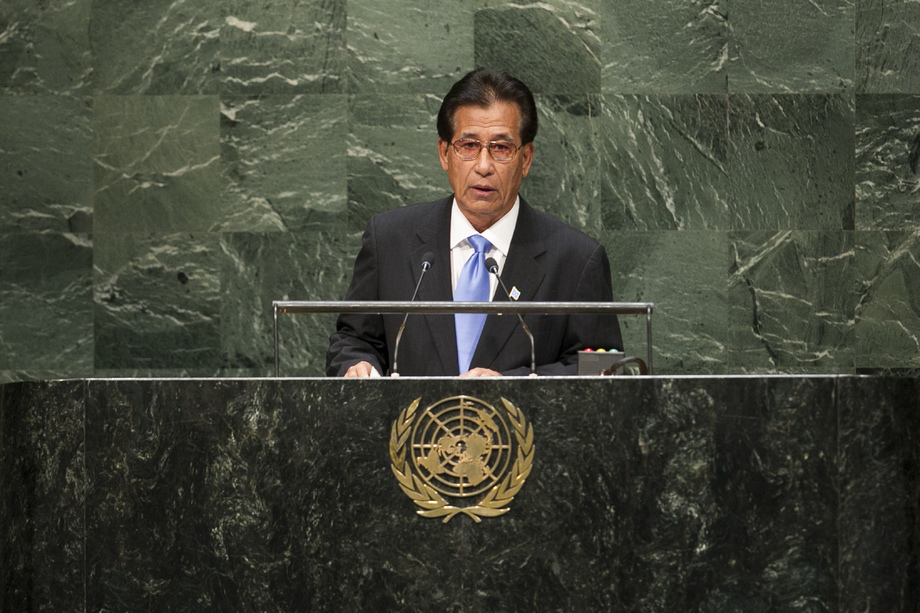 EMANUEL MORI, President of Micronesia, underscored that the small island developing States had brought the issue of climate change to the attention of the United Nations 30 years ago.  Others could speak of that as a future threat, but small island developing States were already facing the impacts, which were worse than science had predicted.  A small increase in sea-levels would be a catastrophe for the atolls in Micronesia.

For small islands to survive, he continued, the Alliance of Small Island States advocated for limiting global warming well below a 1.5˚C increase above the pre-industrial temperature.  That required immediate action from all stakeholders, he stated, voicing support for the World Bank initiative on carbon pricing.  Micronesia had also proposed an amendment to the Montreal Protocol to phase down the production and consumption of hydrofluorocarbons, which, along with reduction of other short-lived climate pollutants, could reduce the rate of sea-level rise by 25 per cent, giving the atolls a chance to survive.  He called on world leaders to adopt the proposed amendment.

The best small island nations could do on the ground was to anticipate and adapt to climate change and install disaster risk reduction and response policies, he said, which Micronesia had done.  He further stressed the critical importance of implementing the Samoa Pathway, to stimulate sustainable development in small island developing States through durable and genuine partnerships.  Endorsing the proposed Sustainable Development Goals, he also called on development partners to assist in the implementation of Micronesia’s national energy policy.

Regarding oceans and fisheries, he said foreign vessels, which enjoyed unprecedented returns from harvesting his country’s exclusive economic zone, must help maintain the health, productivity and resilience of the ocean, and fairly compensate Micronesia for the value of its resources.  Further, illegal, unreported and unregulated fishing must be stopped.  Widespread cooperation and support was also needed to tackle the leading cause of death in the Pacific, non-communicable diseases.  He further urged the establishment of a “One UN” approach for the North Pacific.  The current United Nations Joint Presence in the region must be made more efficient at the country level.

Noting that the United Nations target for ODA was 0.7 per cent of GDP for development assistance, he said that most developed nations fell far short of that goal.  He made an urgent call for delivery of real money from the major economic Powers who were also the major polluters.  He also looked to development partners to accelerate implementation of the country’s new telecommunications system.  In addition, it would be inconceivable to have a reformed Security Council without permanent seats for Japan, Germany, Brazil and India, as well as representation from Africa.