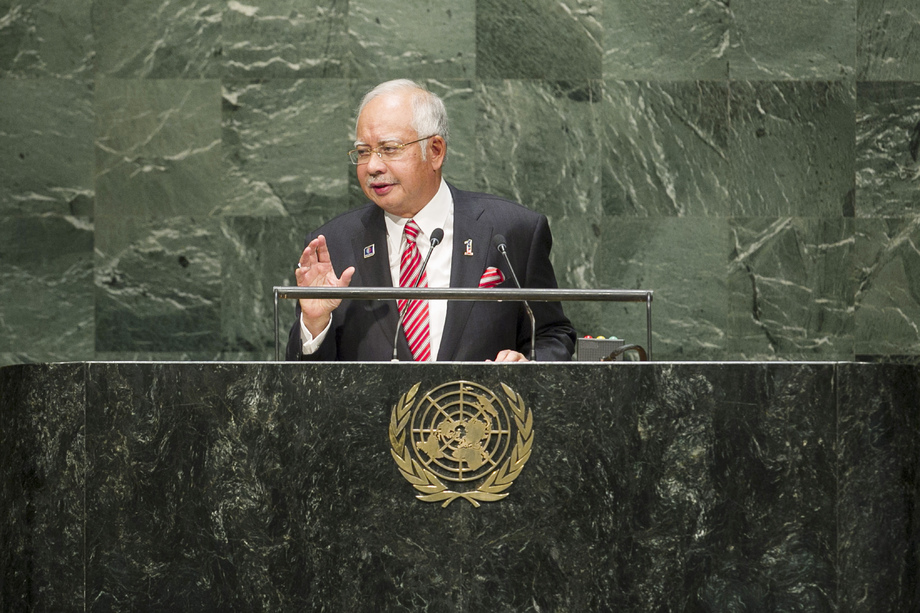 Dato’ Sri Mohd Najib bin Tun Haji Abdul Razak, Prime Minister of Malaysia, said his country had contributed more than 20 million rubber gloves to help doctors and nurses who were working to stop the Ebola outbreak.  On other matters of interest to his country, he said the MH370 and MH17 tragedies would be remembered forever; his Government would not give up the search for MH370 and would continue to seek justice for those who had died in the downing of MH17.  He recalled that, four years ago, in the General Assembly, he had called for a global movement of moderates to counter extremism.  “The threat to world peace and security is not Islam, but extremism,” he said.  The question had been how to respond to it.  In the past, the international community had launched wars against it without planning for peace.  It had attacked one evil only to see a greater evil emerge.  “This time must be different,” he said, stressing the need to defeat not just extremists, but also their ideas.  True Islam must be promoted.

Malaysia, he said, had marginalized extremism, maintaining a multi-religious country, where different faiths coexisted and prospered, and showed that Islam could not only succeed, but drive progress and development in a pluralistic society.  In Malaysia, there were streets in which mosques, temples and churches stood side-by-side.  This moderate approach could make a valuable contribution to fragile States and international affairs alike.  It was a philosophy Malaysia used when acting as an honest broker in peace processes in the southern Philippines and elsewhere.  Malaysia would pursue that approach as it chaired the Association of South-East Asian Nations (ASEAN) next year and moved it forward at the United Nations in the coming weeks.  That work informed its bid for a non-permanent seat on the Security Council for the coming term.

The fight against extremism was not about Christians versus Muslims, or Muslims versus Jews, but moderates versus extremists of all religions, he continued, emphasizing the need to rally a coalition of moderates.  The fight against extremists must be won, not just in Syria and Iraq, but in the United Kingdom, Belgium, the United States and Malaysia.  His country had managed to prevent extremism from gaining a foothold, but a few Malaysians had been lured by foreign terrorist fighters into Iraq and Syria.  Countries must educate, include and confront those at risk of radicalization.  They must also confront the myth that committing atrocities in the name of an Islamic State was an act of faith and that death in the service of that aim brought martyrdom.

Extremists used that distorted narrative as a recruitment tool, he pointed out.  An international conference of scholars of Islamic law, convened by his Government, had agreed that for a State to be called “Islamic” it must deliver economic, political and social justice, and must protect and advance the six objectives of Islamic law: the right to life, religion, family, property, dignity and intellect.  ISIL had violated every single one of those.  It was neither Islamic, nor a State, he concluded, stressing that Islam was a religion of peace, one that valued coexistence, mutual comprehension and learning.