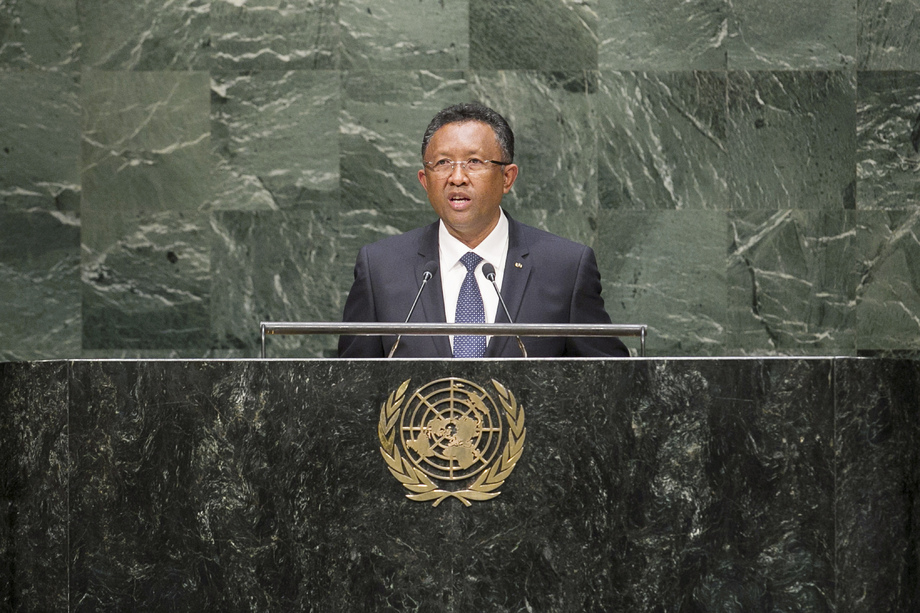 Hery Martial Rajaonarimampianina Rakotoarimanana, President of Madagascar, said that in choosing to restore constitutional order through the ballot box, the people of his country had confirmed their commitment to security and stability. In so doing, they were building peace and security in the region and throughout the world. Without peace, there could be no development, and without development, there could be no peace. While his country had already achieved important milestones in development, it lacked the resources to tackle the magnitude of the tasks at hand.

Five per cent of the world's biodiversity was located in Madagascar, he said. His country had sought to preserve that wealth and to ensure better management of it for future generations. For example, Government authorities were working on a zero-tolerance policy on all kinds of trafficking of natural resources and wildlife. Madagascar’s strategic location meant that it had to protect fishing areas and marine reserves. Due to the increased potential for piracy, terrorism and trafficking, international cooperation was needed to protect such areas.

Madagascar was also strengthening its legal arsenal by ratifying a number of multilateral agreements, such as the Doha Amendment to the Kyoto Protocol, on action to address climate change, he said. As his country had experienced more than five years of political crises together with sanctions and all kinds of inhibitive measures, it was clear that it would not achieve most of the Millennium Development Goals. Nevertheless, it had focused on the development of its people, in the areas of education, health care, jobs, security and access to information. The stakes of climate change were enormous for Madagascar. While resources to mitigate it fell short, his Government had nevertheless taken steps to reduce its impact by drafting a national policy for clean development and renewable energy.

As a demonstration of Madagascar’s commitment to the United Nations beyond participation in its committees or conferences, he said that national police and penitentiary administration served in the Organization’s peacekeeping operations in Africa. The Government had also sent 140 police officers to serve in the United Nations Multidimensional Integrated Stabilization Mission in the Central African Republic (MINUSCA). It continued to advocate equitable representation in the Security Council so that countries directly involved in crises and conflicts could take part fully in the resolution process.