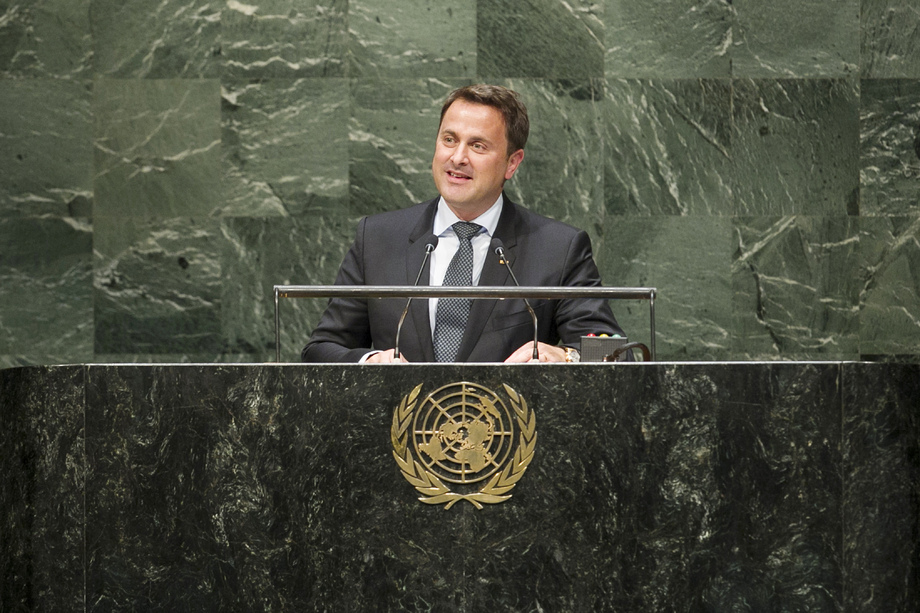 XAVIER BETTEL, Prime Minister of Luxembourg, said that "commitment, solidarity and responsibility" would continue to guide his country's action at the United Nations, which was at the heart of multilateralism.  As for a transformative post-2015 development agenda, he highlighted the session’s theme and said the new framework must be bold and ambitious if it was to live up to its collective responsibility to eradicate poverty and promote sustainable development.  It must also build on the Millennium Development Goals and go further.  The agenda, he continued, must be holistic, action-oriented, universally applicable, benefitting both developing and developed countries, and human-rights-based.  Emphasis on the social sectors, including health and education, must include issues of governance, justice, peace, security, environmental protection, sustainable consumption and production patterns, as well as sustained economic growth.

Since 2000, he said, Luxembourg had belonged to the group of five industrialized countries, which devoted at least 0.7 per cent of gross national income (GNI) to development cooperation.  In 2009, Luxembourg’s development assistance had reached 1 per cent and the Government was committed to maintaining that high level.

The Climate Summit, he said, had fulfilled the dual objectives set by the Secretary-General: to harness the indispensable political will to reach a global agreement in 2015 and catalyse concrete action on the ground to reduce emissions and increase resilience.  During the second half of 2015, his country would assume the presidency of the European Union Council, and in that role, would spare no effort to find, at the Paris Climate Conference, an international agreement on climate, with the objective of keeping the increase of global temperature below 2°C.  With European partners, his country had made binding commitments to reduce greenhouse gas emissions, and at the recent Summit, had supported carbon pricing.  It had also announced a new contribution of 5 million euros to the Green Climate Fund.

Turning to his country's role in the Security Council, he said that Luxembourg, together with Australia and Jordan, had tabled two resolutions on humanitarian aid access to Syria, which had been adopted unanimously.  Yet, humanitarian action was no substitute for political action.  On extremism, he said that ISIL was neither a State nor Islamic.  It tarnished Islam and sought only to spread its terror regime to destabilize Syria, Iraq and beyond.  Luxembourg fully supported measures to counter individuals and entities associated with Al-Qaida, such as those aimed at cutting off financing, preventing radicalization and stemming the flow of foreign terrorist fighters.  Beyond the fight against terrorism, the global community must tackle the root causes of the grave crisis in Iraq.  In that context, he welcomed the formation of a new Iraqi government of national unity.