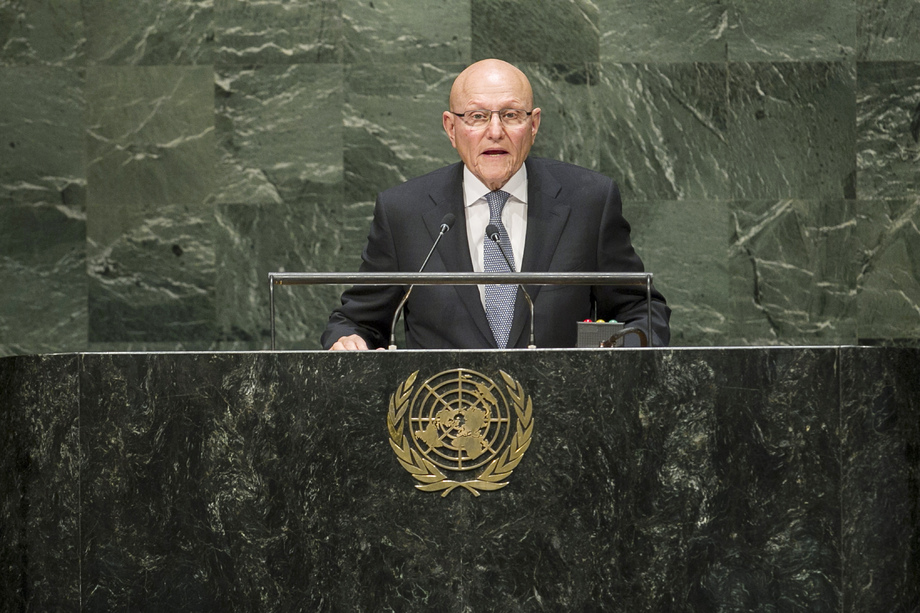 TAMMAM SALAM, President of the Council of Ministers of Lebanon, voiced concern at the “terrorist onslaught” his country was facing from “obscurantist and criminal groups”, which had attacked various Lebanese regions causing loss of military and civilian lives and considerable material damage.  Those crimes had obstructed ongoing indirect negotiations conducted by his Government in the turbulent region.  The present international mobilization against terrorist activities reflected a global awareness of the urgent need to extinguish “blazing flames” in the region.  Noting that Lebanon’s fight against terrorism was not new, he said he looked forward to unveiling the truth, ending impunity, and ensuring justice was served through the work of the Special Tribunal for Lebanon.

The events unfolding in Syria and Iraq represented human crimes that could not be understood or accepted by any mind or religion, he continued.  Committed in the name of Islam, they had cost the lives of tens of thousands of Muslim civilians and had caused unprecedented waves of displaced persons, while destabilizing nations, dividing societies and destroying human and material resources.  Noting the attacks against Christians and Yazidis in Iraq, he said that any offensive against religions or their followers and sacred places was an offensive against human dignity.  His country had the only Christian president in the Middle East and despite political crises, Lebanon remained a model of diversity in the region.

The Syrian war had displaced 1.5 million Syrians into Lebanon, equivalent to one third of its total population, he said.  That had been placing an unbearable burden on economic, humanitarian, social, education, health and security systems.  Due to the regional situation, national economic growth had dropped to zero, causing the country a loss of $7.5 billion.  It was a national disaster.  The burden of Syrian refugees could not be borne by any one country, but must be shared.  Expressing concern for the unity, sovereignty, independence and territorial integrity of Syria, he reaffirmed his Government’s policy of “self-distancing” to protect Lebanon against the repercussions of neighbouring crises.

He continued to appeal to the international community to compel Israel to fulfil its obligations under Security Council resolution 1701 (2006), to stop violating Lebanese sovereignty by land, sea and air, cooperate fully with the United Nations Interim Force in Lebanon (UNIFIL) and withdraw from the area north to Ghajar, the Shebaa Farms and Kfarshouba Hills.  Further, he reaffirmed Lebanon’s rights to territorial waters, and to the natural oil and gas within its exclusive economic zone.  He also called for legal accountability for war crimes committed by Israel, including in Gaza, underscoring that Israel was responsible for foiling all efforts to reach a peaceful settlement based on a two-State solution.

The Levant today provided an ugly platform where the latest form of human savagery was on display, he said.  The region, however, was made up of ordinary people with land, homes, tales, dreams and history, eager to live as free and equal citizens in free and stable countries.  “The world must stop counting our dead, and must rise to its obligation and seek to establish peace in this tormented part of the world,” he stated.  That peace must be based on right and justice, while respecting the sovereignty of nations, upholding their security and safeguarding the fundamental rights of individuals and groups.