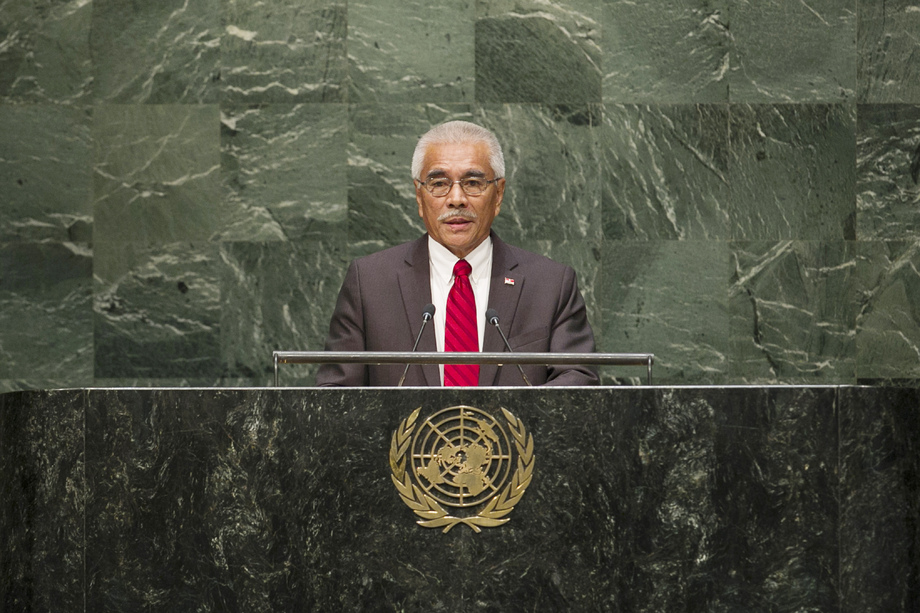 ANOTE TONG, President of Kiribati, said those on the frontlines of climate change welcomed the renewed focus and rallying by Member States at this week's Climate Change Summit.  The real challenge was in translating those commitments and announcements into action.  Successful conferences did, however, signify the United Nations' recognition of the need to highlight the special cases of those States and to re-focus global attention to the prevailing socioeconomic and environmental challenges that continued to constrain the efforts of small island developing States.

Climate change remained the biggest threat to mankind, he said.  The international community could not afford to ignore the stories of island States like his regarding the plight of their people; that plight would be the world’s further down the line.  He had personally just returned from an expedition to the North Pole and was "still overwhelmed" by what he witnessed there with his own eyes.  The melting of massive sheets of ice in the Arctic region due to climate change would not only have severe impacts on the lives of people in that region, but would also result in the demise of future generations in other parts of the globe.

For Kiribati, climate change was not an event in the future, he said.  Rather, it was an event his country was dealing with today, and the international community could not talk about sustainable development without talking about climate change.  Kiribati was taking responsibility for its own well-being and sustainable development needs, with climate change and adaptation measures integrated into the national budgeting process and development programmes to strengthen disaster risk management.  The "migration with dignity" strategy was an investment in the education of Kiribati's people, equipping youth with qualifications and employable skills to help them migrate with dignity to other countries.

In July, he said, Kiribati and other low-lying atoll island States, including Tuvalu, Marshall Islands, Maldives and Tokelau, had formed a Coalition of low-lying Atoll Nations, called “CANCC” or "can see".  That initiative aimed to highlight urgent action that must be taken now to assist those countries and all vulnerable communities to adapt to the impacts of climate change.

He further said that the ocean played a pivotal role in the sustainable development of his country, hinged on a "blue economy" and on the sustainable management of marine and ocean resources.  While Kiribati had been labelled a "small island developing State", it was in fact a "large ocean State", spanning an ocean area of 3.5 million square kilometres.  The ocean had been an integral part of Kiribati life from time immemorial, and while it posed a serious threat to survival now from sea level rise, it also provided immense opportunities through which to realize sustainable development and livelihood.

Human activities were responsible for the accelerated degradation of the global environment in the pursuit of short-term economic gains, which had been done without due regard to the health of oceans and the environment, he said.  Never before in history had the health of the oceans and planet been so challenged.  The international community shared responsibility and obligations to protect the ocean and to sustainably manage its biodiversity from further detrimental degradation.  Kiribati would be closing off the Phoenix Islands Protected Area in January 2015 from all commercial fishing.  That area was approximately 11 per cent of Kiribati's exclusive economic zone, and was about the size of California. The closure would entail a loss of much-needed revenue for Kiribati.  However, it was a major — but necessary — short-term sacrifice for the long-term health of the ocean and for sustainable fish stocks and global food security.