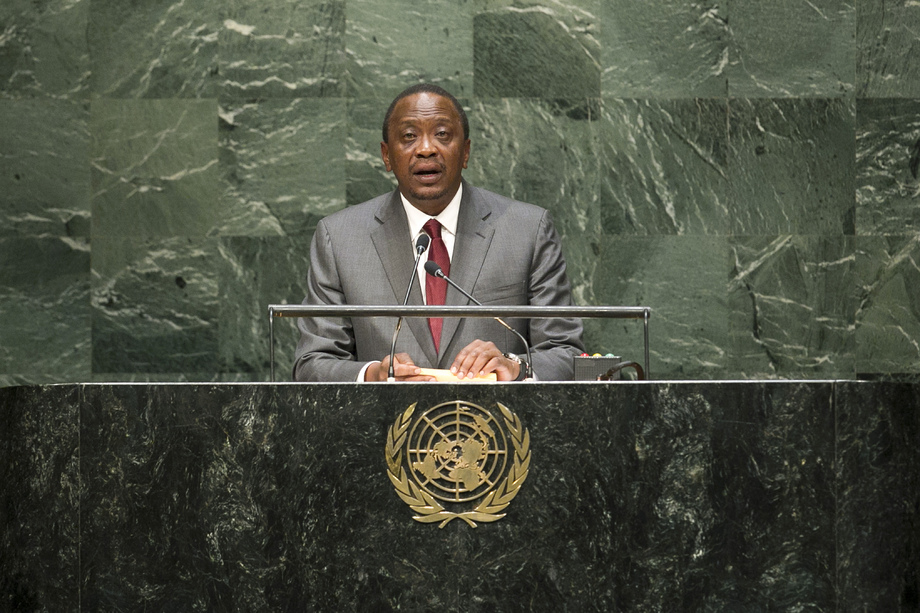 UHURU KENYATTA, President of Kenya, called for urgent, sustained attention to the devastating Ebola crisis in Liberia, Sierra Leone and Guinea.  Kenya stood in solidarity with those affected countries, and earlier this month, had given $1 million to the effort to bring the crisis under control; it stood ready to do more.  Last week, East African Health Ministers had met in Nairobi and agreed on steps to safeguard their populations and ensure the virus did not spread to the region.  The Government stood ready to resume Kenya Airways flights once appropriate measures were in place.  He welcomed creation of the United Nations Mission for Ebola Emergency Response (UNMEER), stressing that the Ebola crisis underlined the need to build strong States in the region that could withstand and respond to emergencies.  “We must commit to build strong, resilient and accountable States that can effectively respond to shocks, adversities and emergencies in the future,” he said.

Kenya had been at the forefront of driving the Assembly’s Open Working Group process to create the sustainable development goals, he went on, urging that the post-2015 development agenda address the cross-section of social, economic and environmental challenges, and be universal, comprehensive and responsive to all nations equally.  Kenya was at a critical moment; as it deepened democracy, it was thrust into the front line of a regional and global war against terror.  Without an effective buffer, Kenya and other countries would find it difficult to entrench democracy and the post-2015 development agenda.  He expressed particular concern over the perennially fragile state of affairs in the Greater Horn of Africa.  Kenya continued to sacrifice lives and resources to bring peace to neighbouring Somalia.  The international community must stay the course to consolidate peace, invest in stable institutions and promote democracy there.

Kenya and other countries of the Intergovernmental Authority for Development (IGAD) had invested much to end the tragedy in South Sudan, but progress had been slow, he said.  “We cannot let this young nation down.  At this Assembly, I make a special plea for South Sudan, for no nation has, over the years, suffered as much neglect from the international community,” he said, also imploring the nations’ leaders to “demonstrate determined and enlightened leadership and to make peace without further delay”.  Africa’s outdated development model had run its course.  Future socioeconomic transformation would come from within the continent, aided by external ideas and resources.  For the post-2015 development agenda to be transformative, it must first embrace the primacy of developing countries.

This year, Kenya had presided over the Conference of State Parties of People Living with Disabilities, the Forum on Forests and had co-chaired the Open Working Group on Sustainable Development Goals, he noted.  The country’s transformation agenda was grounded on Vision 2030, which, building on the 2010 Constitution, aimed to make the governance system more democratic, inclusive and responsive.  The Government had launched financial initiatives and training programmes for women and youth, and advanced children’s rights and welfare through universal immunization coverage and promoting breastfeeding during the first six months of an infant’s life.  It had provided fortified food and insecticide mosquito nets, along with free maternal health care and child care in Government hospitals.  Additionally, the “Beyond Zero” campaign was bolstering management of chronic preventable diseases.

He said his country was on track to achieve the Millennium target for universal primary education, noting its implementation of a social protection cash transfer programme for orphans and vulnerable children, people with severe disabilities and the elderly, targeting 45,000 households.  To fight illicit wildlife trafficking, it had enacted laws and continued to work with other countries and organizations to enhance protection of fauna and flora.  Kenya also continued to work to achieve 10 per cent forest cover; it was well above global targets for renewable energy use and fully supported all steps agreed at the recent United Nations Environmental Assembly in Nairobi.  It was engaged in a range of activities to hasten East Africa’s integration, easing restrictions on cross-border trade.  It also continued to invest heavily to combat extremism and terrorism.