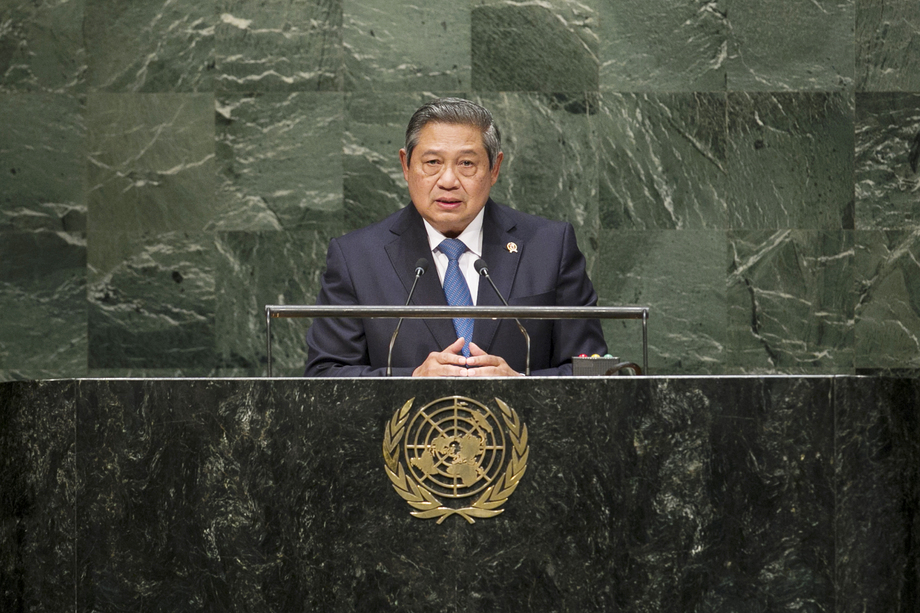 SUSILO BAMBANG YUDHOYONO, President of Indonesia, said that in his country’s effort to achieve the Millennium Development Goals, he had learned one key lesson: the most important driver of change lay not only in good governance but in smart governance. It involved innovative leadership and active public participation, and was needed to achieve desired results. With smart governance, Indonesia had managed to increase its national income per capita by 400 per cent in just a decade.

Noting that improved relations among major Powers had created ample space for new strategic and economic opportunities, he said global trade had reached $23 trillion, which was an almost six-fold growth since one year after the end of the cold war in 1990, with the fastest growth occurring from 2000 through 2013, at a rate that was one and a half times faster than that of the preceding two decades. That coincided with the pursuit of the Millennium Development Goals. The value of global investments had reached almost $1.5 trillion in 2013 for a near seven-fold growth since 1990. That positive geopolitical development had allowed South-East Asia to develop stronger cooperation and develop the region’s architecture.

Today, however, relations among major Powers were worsening and those that were previously stable and cooperative were now marked with volatility and tension, he said. The international community had an obligation to resolve major issues in order to end the suffering of the Palestinians in Gaza and the rest of the Occupied Territory, to deliver the still elusive two-State solution, to resolve the conflict in Ukraine and to find an effective and durable solution to the ongoing conflicts in Syria and Iraq. It was not enough to simply call for peaceful co-existence; the twenty-first century required world Powers to “turn the trust deficit into a new strategic trust”, not just among themselves, but also among emerging Powers and all Member States. With firm resolve, that was indeed possible, as seen by what had transpired in South-East Asia.

He recalled that in the second half of the 1960s, South-East Asian nations were poor, divided, insecure, threatened by a war raging in their neighbourhood and ignorant of each other. However, the establishment of Association of South-East Asian Nations (ASEAN) had enabled countries in the region to form the habits of dialogue and consultation and learn to trust one another. Today, those once-divided countries belonged to ASEAN and were all drivers of regional affairs. They had peacefully resolved a number of sensitive inter-State and intra-State conflicts, while others were being addressed through dialogue and negotiation.

The aspiration for peace and co-existence of Indonesia and the ASEAN region, he said, was “the antidote to the poison” of fundamentalist prejudice and intolerance, as practiced by a terrorist group in Iraq and Syria, which falsely styled itself as the Islamic State. The ideology of ISIS not only betrayed the true teaching of Islam as a religion of peace, but also harmed the Islamic ummah throughout the world. On a planet marked by turbulent transitions in the Middle East, Indonesia had shown that democracy, Islam, modernity and human rights went together. He hoped that the pioneering spirit, which had allowed Indonesia to open a new chapter of non-violent relations with Timor-Leste and peacefully resolve its overlapping maritime borders with Viet Nam, the Philippines and Singapore, among others, would be the same pioneering spirit that could aid the international community in conquering poverty and social injustice, and in creating a culture of peace among all faiths.