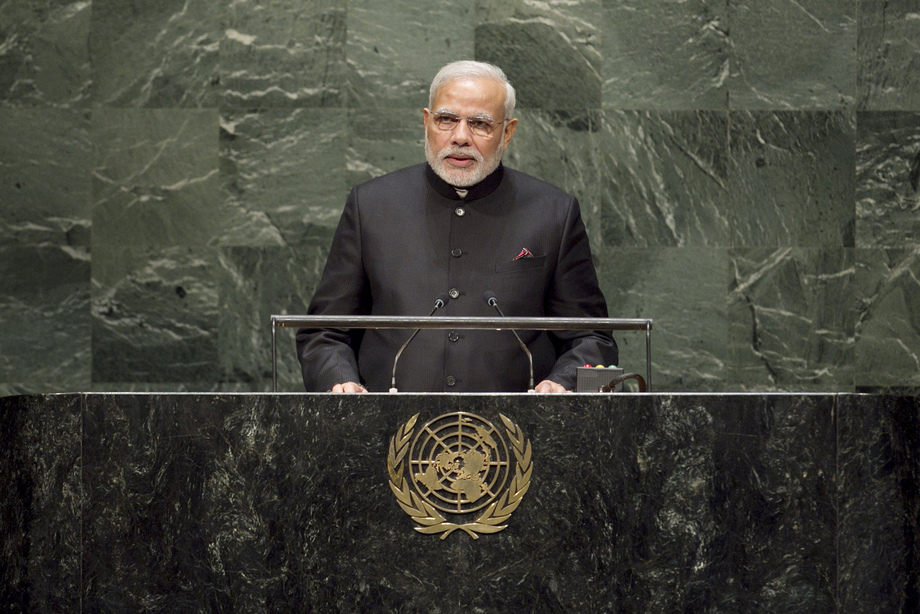 NARENDRA MODI, Prime Minister of India, noted that there was a surge of democracy across the world.  Afghanistan was at a historic moment of democratic transition and affirmation of unity.  Nepal had moved from violence to peace and democracy.  Bhutan’s young democracy was flourishing.  Democracy was trying to find a voice in West Asia and North Africa, with Tunisia’s success demonstrating it was possible.  There was a new stirring for stability and progress in Africa and unprecedented spread of prosperity in Asia and beyond.  Latin America was coming together in shared pursuit of stability and prosperity.  As well, India desired a peaceful and stable environment for its development, as a nation’s destiny was linked to its “neighborhood”.

He said he was prepared to engage in a serious bilateral dialogue with Pakistan in a peaceful atmosphere, without the shadow of terrorism, to promote friendship and cooperation.  Pakistan must also take its responsibility to create an appropriate environment.  Raising issues in the General Assembly was not the way to make progress towards resolving bilateral issues.  Instead, both sides should be thinking about the victims of floods in Jammu and Kashmir.  India had organized massive flood relief operations and had offered assistance for Pakistan-occupied Kashmir.

“Let us bring ourselves in tune with the call of our times,” he said, pointing out that the world was witnessing tensions and turmoil on a scale rarely seen in recent history.  No one country or group of countries could determine the course of the world.  There had to be a genuine global partnership.  That was not just a moral position, but a practical reality.  Putting aside differences, Member States should mount a concerted effort to combat terrorism and extremism, he said, urging them to adopt the Comprehensive Convention on International Terrorism.  Furthermore, the international community must pursue a more stable and inclusive global development.  Globalization had created new poles of growth, yet billions of people still lived on the edge of poverty.

He highlighted the need to change people’s lifestyles to create a more habitable and sustainable world, and in that regard, he said he believed that yoga could help.  Yoga embodied unity of mind and body; thought and action; restraint and fulfillment; harmony between man and nature; a holistic approach to health and well-being.  It was not about exercise, but about discovering the sense of oneness with self, the world and the nature.  “By changing our lifestyle and creating consciousness, it can help us deal with climate change,” he said, urging delegates to adopt an International Yoga Day.

Speaking in exercise of the right of reply, the representative of India responded to “unwarranted references” made by Pakistan's Prime Minister in his speech, stressing that Jammu and Kashmir had peacefully chosen their future. He rejected in their entirety the comments made.

The representative of India rejected the remarks made by Pakistan and noted that they were willing to engage in dialogue “without the shadow of terror and fear”.  Raising issues in the forum would only derail future efforts of reaching a peaceful settlement.

The representative of India took the floor to reject in their entirety the comments made by Pakistan.