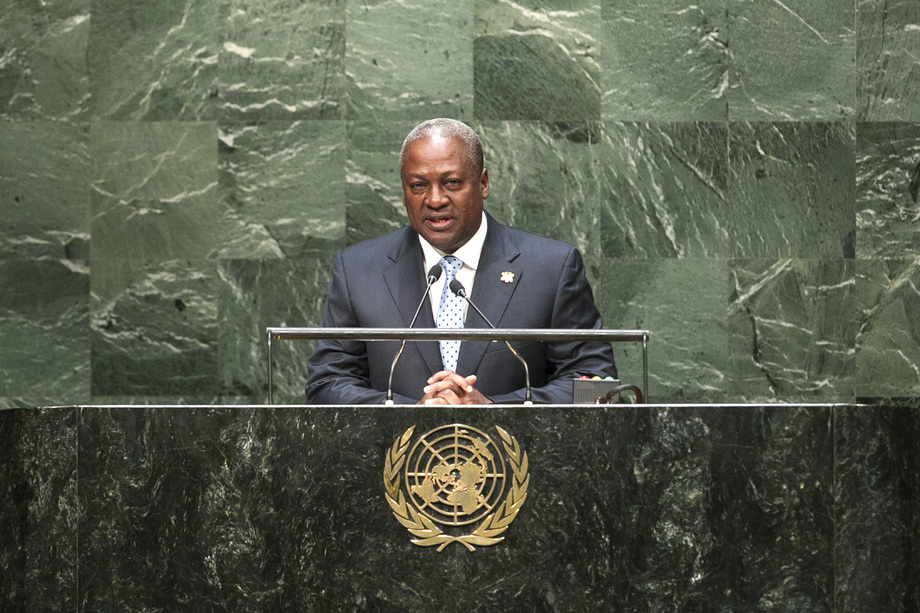 JOHN DRAMANI MAHAMA, President of Ghana, said that Liberia, Sierra Leone and Guinea, the three countries most affected by the Ebola outbreak, had been struggling to rebuild their social and economic infrastructures. Even before the outbreak, they had been operating with limited resources, an insufficient number of treatment facilities, and a shortage of qualified medical staff. So far, there had been 5,843 recorded cases of Ebola, of which 2,803 had resulted in death, with the World Health Organization (WHO) predicting that the number of cases could rise to 20,000 by November if the disease was not brought under control. Ebola was not just a West African problem, but a global one, as it knew no boundaries. To help the affected countries, Ghana had offered its capital city, Accra, as a base of operations for activities geared towards containing the disease.

On terrorism, he highlighted the particular vulnerability of Africa, which, due to its sheer size and vast terrain, offered a myriad of places for terrorists to hide and create safe havens. With more than 60 per cent of Africa’s population under the age of thirty-five and a significant number living in extreme poverty, terrorists also had the opportunity to recruit by exploiting the ignorance and disillusionment of young people who lacked the skills, education and opportunities to find gainful employment. The problem had been made even worse with the proliferation of technology, facilitating communication within terrorist cells and between terrorist organizations.

On Ghana’s current economic situation, he noted that over the past year his people had seen an increase in the cost of living. Falling commodity prices had led to a decline in tax revenue from companies operating in the country, as well as to a massive drop in export earnings. That had contributed to a general sense of macroeconomic instability, and had placed a lot of pressure on Ghana’s currency. Furthermore, instability in the global commodity markets had directly affected public budgets and, hence, the country’s ability to finance its development.

With regard to gender equality, he highlighted Ghana’s commitment to the improvement of women’s lives. His Administration boasted the highest number of women appointed to public office in the history of Ghana, including seven female Cabinet ministers. Furthermore, it had submitted to Parliament an Intestate Succession Bill, which ensured that if a spouse died without having written a will, the surviving spouse would not be dispossessed of their marital assets. Also submitted to Parliament was a Property Rights of Spouses Bill, which ensured that in the case of marriage dissolution, a spouse would be entitled to an equitable portion of the property acquired during the union.