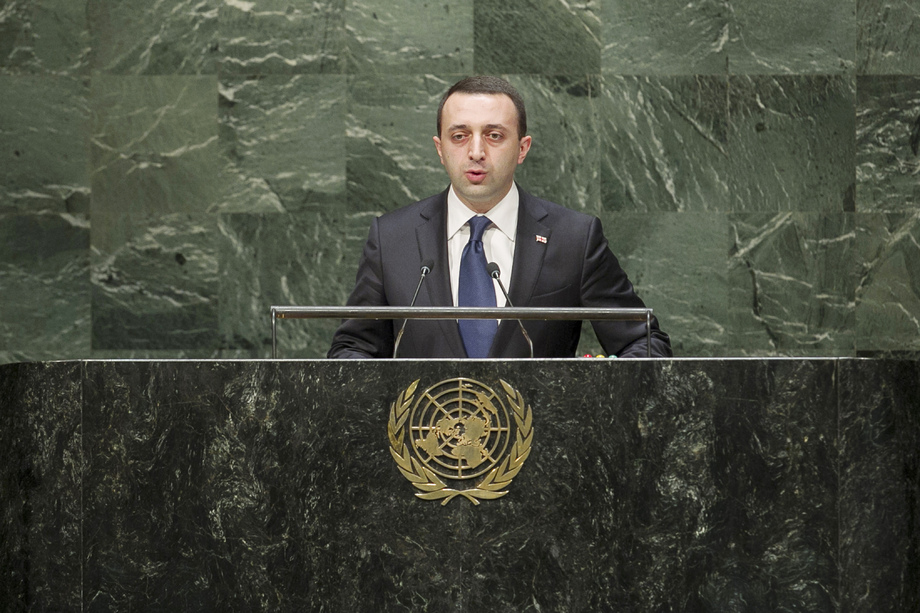 IRAKLI GARIBASHVILI, Prime Minister of Georgia, said that, despite significant progress, his country was still a young democracy and took nothing for granted.  In tough times, the public protested and cast votes at the ballot box to ensure continued democracy, and steps had since been taken to break cycles of corruption and impunity, and to make the economy more inclusive.  Governance and the rule of law were stronger, and he celebrated recent elections and stressed that his Government would be accountable.  Democratic institutions were being strengthened and a new Constitution had been approved.  Parliament acted as a proper legislature and was no longer a “rubber stamp”.  A human rights strategy and action plan, anti-discrimination laws and an independent judiciary were all in effect and the media and civil society were playing a greater role.

He said that efforts towards NATO membership were accompanied by an Association Agreement with the European Union to gradually establish European political, economic, social and legislative norms and standards.  Georgia’s democratic transformation could serve as a model for other countries.  The economy was opening, with investment and reforms, and the Government would implement the new development agenda and take seriously the “ Rio+20” outcomes.  Social equity and protection of the environment were also important to economic growth, as were gender equality, women’s empowerment and a concentration on youth.

Internally displaced persons and refugees were major concerns for Georgia, he said, noting increased numbers arriving from the Middle East and Ukraine.  His country gave political and technical assistance to Ukraine and supported its territorial integrity and sovereignty.  The General Assembly resolution on internally displaced persons and refugees from Georgia was welcome, and he was committed to restoring Georgia's full territorial integrity and sovereignty.  Efforts to improve relations with the Russian Federation were ongoing under a two-track approach.  On the one hand, "significant results" had been achieved in the pursuit of resumedtrade, and economic, cultural and humanitarian relations, but in terms of pursuing Russian respect for the 2008 ceasefire and troop withdrawal, Georgia's efforts had not met the same spirit of cooperation.  Georgia was the largest non-NATO troop contributor to the International Security Assistance Force (ISAF), and he looked forward to NATO membership.  Georgian troops were also part of the European Union deployment to the Central African Republic.

He was committed, he said, to using Georgia’s strategic location to connect Asia, Europe and the Middle East.  The “ Silk Road” had reopened, which he believed was among the greatest post-cold war achievements.  To unlock its full potential, the international community should redouble efforts on trade and transport, energy and people-to-people contacts.  Georgia had deepened cooperation with countries on the Silk Road, he said, adding that transport and energy links were key to economic development and integration.  In that connection, Georgia supported a route for Caspian Sea oil and gas to reach Europe.  Noting the massive expansion of the South Caucasus Pipeline through Azerbaijan and Georgia, he said it was bringing 16 billion cubic metres of new natural gas to Europe and Turkey, and thousands of new jobs to Georgia.  He looked forward to the Silk Road Forum in 2015 to enhance cooperation.  Georgia would seek to install clean and renewable energy, especially hydropower, in order to become carbon neutral, he added.