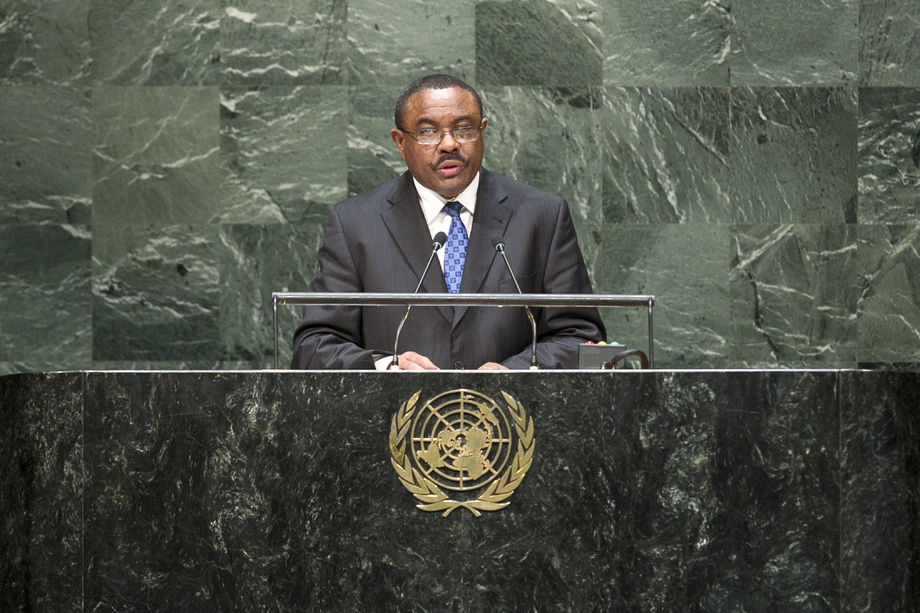 Hailemariam Dessalegn, Prime Minister of Ethiopia, said that the current session was being held at an historic period characterized by a major undertaking to shape "the future we want".  "If we did what we must, it could be remembered in history as a session that helped us turn the corner in ensuring effective custodianship of the environment, economic justice and social responsibility," he said.

Noting that last month marked 500 days until the target date of the Millennium Development Goals in 2015, he said Africa had registered robust economic growth over the last decade and that the stereotypical narrative about the continent was slowly changing.  " Africa is now the rising continent offering tremendous opportunities for trade and investment," he said.  Notable progress had been made on the implementation of the Millennium Goals in the region.  However, much remained to be done, and thus it was important not to overlook the Millennium Goals as they remained "unfinished business".

Noting that Ethiopia would host the Third International Conference on Financing for Development in Addis Ababa in July 2015, he said the effectiveness of the post-2015 agenda depended, among other things, on the success of the Conference.  On climate change, he stressed the need to reach a globally binding agreement by 2015 to limit the rise of global temperature.  Africa was facing the brunt of climate change and that was undermining its development aspirations, including the Millennium Goals.  Mitigation and adaptation remained a priority for the region, he said, calling for international support in that regard.

"Conflict is not an exclusively African phenomenon," he said, underscoring that the threat of terrorism had affected ever greater and wider areas of the world.  At no time over the last many decades had the need for effective international and regional cooperation been as pressing as it had been today.  The issue of "foreign fighters" had become a source of major concern to many.  The international community could not be oblivious to the nexus between the sustainable development agenda and the global situation of peace and security.  Delivering on and implementing a transformative post-2015 development agenda required a peaceful and stable global environment.  In that vein, the spread of the Ebola virus was both a humanitarian and security challenge, and containing that disease should be a matter of utmost priority.