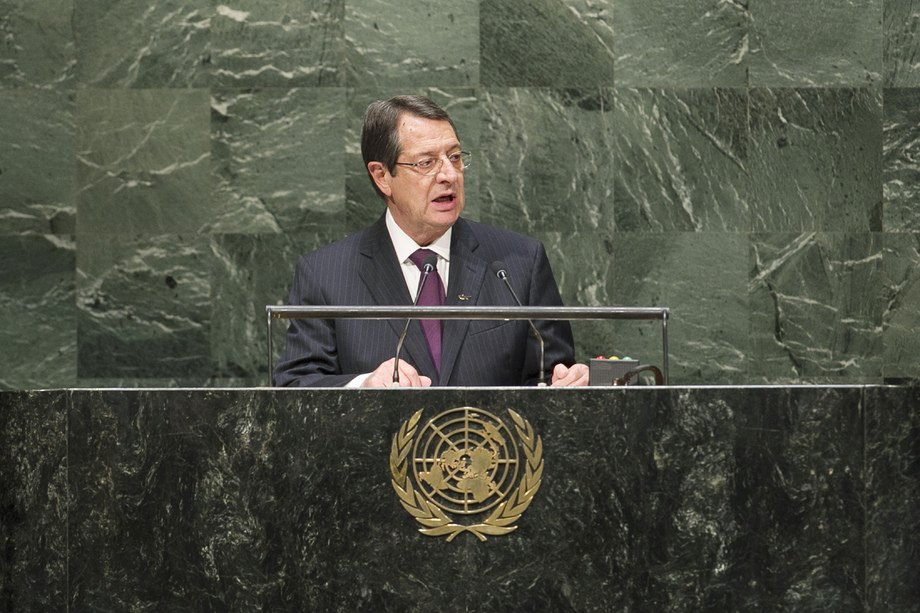 NICOS ANASTASIADES, President of Cyprus, recalled that, in last year’s General Assembly debate, he had expressed his concern about terrorism, annexation of territories via illegal use of force, religious fundamentalism and forcible displacement of millions of peoples.  Unfortunately, and despite international efforts, the global community had not adequately risen to meet those challenges.  What had been witnessed in Libya, Lebanon, Syria and Iraq, particularly following the emergence of ISIL, should not leave delegates indifferent or passive.

Cyprus, which was located at the crossroads of Europe, North Africa and the Near and Middle East, was proud to be a European Union member State and enjoyed excellent neighbourly relations, which was why his country was “considered an honest broker with no hidden agenda”.  The discovery of hydrocarbons nearby had upgraded Cyprus’s strategic importance.  His country stood ready to mediate in bringing neighbouring hydrocarbon-producing and –consuming countries together, as energy could serve as a catalyst for broader cooperation and contribute to peace and stability.

Noting the fortieth anniversary of the violent division of Cyprus, he emphasized that it had been a consequence of the 1974 invasion and its continued occupation by Turkey.  He called for a settlement that would reunite Cyprus and its peoples, restore the fundamental freedoms and human rights of its lawful citizens and relieve the island from the presence of occupying troops.  That was based on an agreed upon compromise that Cyprus would evolve into a bicommunal, bizonal federation with political equality, a single sovereignty, a single international legal personality and a single citizenship.

Drawing attention to the 11 February Joint Declaration agreed upon by the two communities this year, he urged Turkey to constructively contribute to efforts to reach a settlement. “My ultimate vision is to relieve all Cypriots, especially younger generations, the future of the country, from the anachronistic burden of having to live in a divided country in which they are forcibly prevented from enjoying the freedoms that is the birthright of every citizen in the world,” he said.