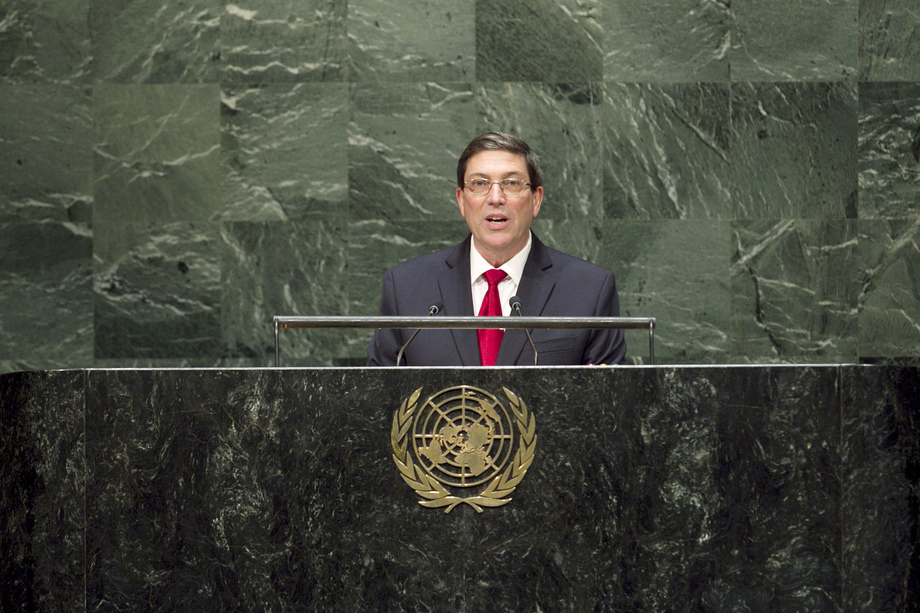 BRUNO RODRÍGUEZ PARRILLA, Minister for Foreign Affairs of Cuba, called for an end to the foreign intervention in Syria.  He said it was "inconceivable" that western Powers encouraged, financed and armed terrorist groups to pit them against one State, while attempting to combat those groups’ crimes in another, as was being seen in Iraq.  The United States Government was infringing upon international law by launching unilateral bombings with complete disregard for national borders or the sovereignty of States, with “doubtful” coalitions.  He also warned that the attempt to deploy the North Atlantic Treaty Organization (NATO) to Russian borders would have serious consequences for Europe’s stability, and pursuant to that, called the sanctions against the Russian Federation "immoral and unjust".

Concerning small island developing States, he said that the Havana Summit had recognized that they, including the Caribbean nations, had been hit hard by the current economic, financial and environmental crisis.  He added that their efforts to enhance the living standards of their peoples should not be punished by classifying the country as “middle-income” based on the schematic estimation of per capita incomes, which overlooked their peculiarities and vulnerabilities.

Speaking on the blockade, he said that the United States State Department had again included Cuba in its unilateral and arbitrary list of State sponsors of international terrorism.  Its true purpose, he added, was to increase the persecution of his country, constraining international financial transactions and justifying the blockade.  Under the present United States Administration, there had been an unprecedented tightening of the blockade’s “extra-territorial” character, with a "remarkable and unheard-of" emphasis on financial transactions through the imposition of multi-million dollar fines on the banking institutions of third countries.