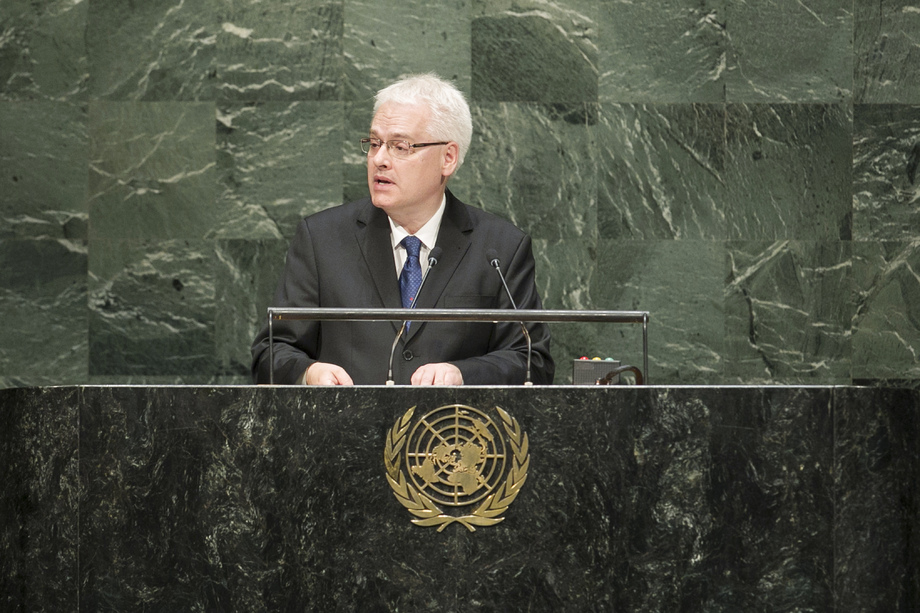 IVO JOSIPOVIĆ, President of Croatia, said that faced with armed conflicts, natural disasters and pandemic diseases, the international community should look to the wise words of the United Nations Charter for guidance in how to deal with the varied threats, doing "everything we can" to avoid regression. Croatia was deeply concerned with the situation in Ukraine. Equally, the spread of terrorism in the Middle East and Africa, notably by the Islamic State in Syria and Iraq, was of grave concern. Croatia was ready to make a contribution to Iraqi forces as well as for Iraqi Kurdish forces, he said.

To be faced with such crises was "truly unnerving", he said, noting that he hoped Croatia's experience with peacebuilding would be applied in helping post-conflict societies stand on their own. His Government expected a review of the peacebuilding architecture of the Organization to consolidate existing knowledge and experience and improve the overall peacebuilding process. Women had a special role in maintaining peace and advancing development, and that was why Croatia was organizing a high-level meeting on 26 September on the gender dimension of sustainable development within the context of post-conflict recovery.

On climate change, his Government was hopeful that a global agreement would be reached, as that pressing issue remained one of the "main pillars" of the post-2015 development agenda. He expressed his Government's support for the Organization’s human rights mechanisms, adding Croatia's voice in calling for universal adherence to the Rome Statute and universal jurisdiction of the International Criminal Court. After reviewing national achievements in regional cooperation, he touched on the need for reform of the United Nations system, particularly Security Council enlargement by an additional non-permanent seat for the Eastern European group, as well as the establishment of a code of conduct regarding the suspension of veto use in cases relating to "mass crime".

On regional consolidation, he said his country looked forward to the day when all countries of South-East Europe would be admitted to the European Union. Cooperating on such diverse issues as humanitarian assistance after devastating floods, or dealing with “truth and justice” in the context of a “difficult past”, countries of the region were finding numerous ways of laying a joint foundation for sustainable peace and stability. The Secretary-General’s Global Education First Initiative was one of the best remedies for achieving such social improvement.