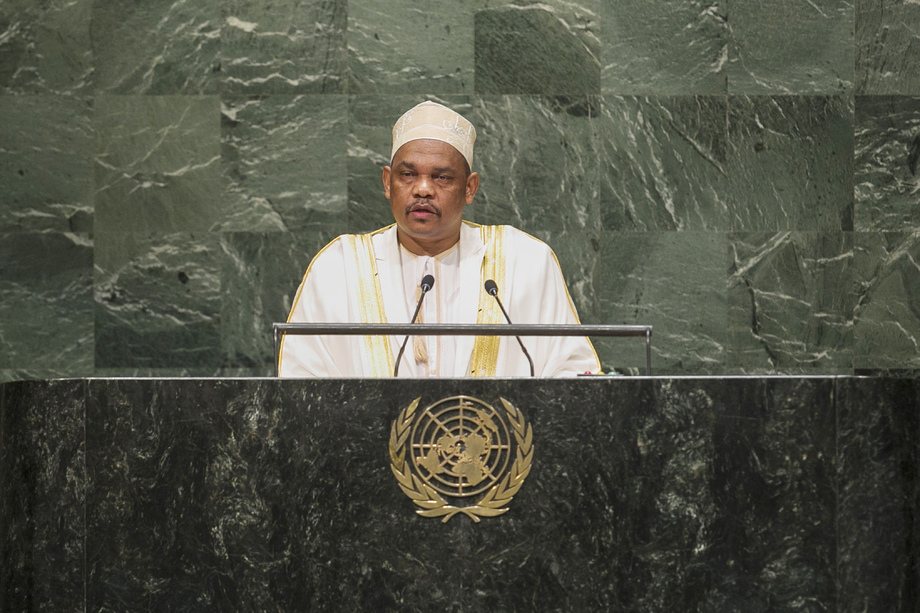 IKILILOU DHOININE, President of Comoros, said that the current session, on the eve of the Organization's seventieth anniversary, was an opportunity to evaluate its performance and harness the process that would make 2015 the year of reform.  In so doing, consideration must be given to the new problems facing the fragile small island developing States and the recommendations resulting from the recent conference in Samoa.  Ways needed to be found to better represent developing countries, particularly those in Africa, which encompassed areas of appreciable economic growth, but also great poverty and bloody conflicts that delayed their development and the well-being of their people.

At the same time, he continued, the Security Council must assume coordination of the fight against terrorism.  In that context, he called for an urgent solution to the problem of Palestine, particularly following the latest bloody attacks on Gaza, which was almost as old as the Organization.  In a changing world, he stressed the importance of prevention in consolidating peace, while trying to resolve crises as they arose.

Turning to his own country, he noted that, although Comoros had been admitted to the United Nations in 1975, the process of the country's decolonization remained to be completed.  A joint high-level council, envisioned in Paris, had been established, holding its first meeting in November 2013.  Among other issues it would deal with was the movement of Comorians among the four islands of the archipelago.  That would help address ending the tragedies, unnoticed by the international community, that Comorian families faced daily.  Dialogue between the two parties was urgently needed to put an end to that human drama.  He had requested the support of the Indian Ocean Commission, of which both Comoros and France were members, to help end a dispute that had lasted for some 40 years.

The Millennium Development Goals were a global covenant of solidarity for the socioeconomic progress of developing countries, he went on to say.  The Comoros had made strides in achieving those goals, among them women's greater participation in political and economic life, maternal health, infant mortality, the fight against HIV/AIDS and equality in children's education, among others.  However, in the areas of food security, environmental degradation, energy, access to clean water and others, much remained to be done.

For that reason, he urged the incorporation of the unimplemented Millennium Development Goals into the Sustainable Development Goals, further calling for reinforcement of strategic partnerships, a fair international trade regime, the promotion of direct investments and greater engagement in the fight against climate change.  It was urgent to implement the recommendations of the various conferences on climate, notably the recent conference in Samoa and the summit that had just taken place in New York.

While there were numerous signs of economic growth in the countries of Africa, he said, the continent must meet the challenges presented to resolve conflicts and multiple threats to its peace and security.  That required international cooperation.  In that context, he singled out the alarming speed with which the Ebola virus was spreading, hailing the measures taken by many countries recently.