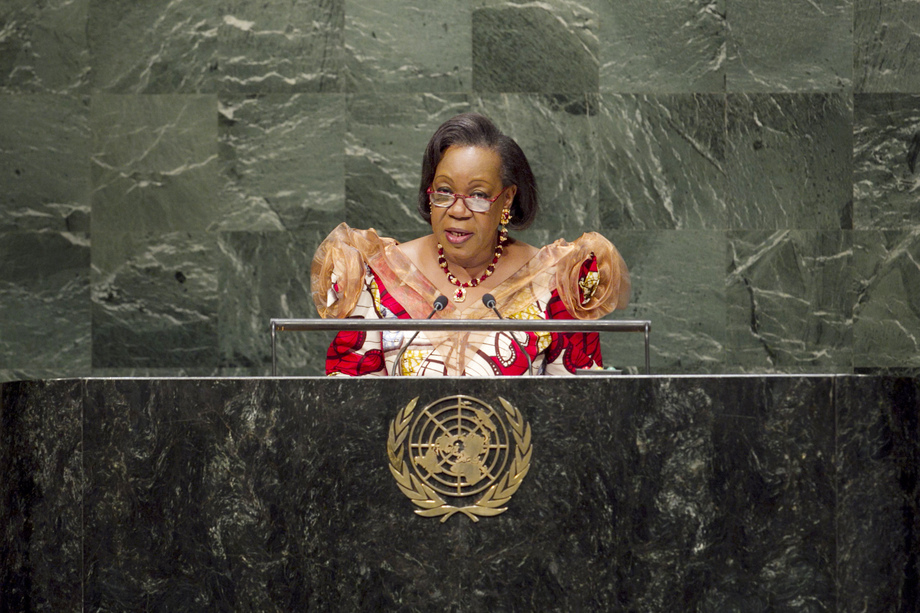 CATHERINE SAMBA-PANZA, President of the Transitional Government of the Central African Republic, said that the current session was taking place while her country was in a difficult situation, which was of interest to all Member States.  Political instability and internal conflicts had plunged the Central African Republic into a state of extreme vulnerability.  The country had been shaken and its people were facing tragic situations.  In January 2014, her predecessor resigned.  Her leadership gave rise to hope.  She was the first female President, representing a radical break from the past.  With firm determination, she had set out to address the nation's challenges, embarking on efforts to restore security and peace, address the humanitarian crisis, launch activities that fostered economic growth, and ensure the convening of free, transparent elections.

Her call for international support for her transitional Government had not fallen on deaf ears, she said, welcoming Security Council resolution 2147 (2014), which had established the United Nations Multidimensional Integrated Stabilization Mission in the Central African Republic (MINUSCA).  Since 15 September, authority had been transferred from the African-led International Support Mission to the Central African Republic (MISCA) to MINUSCA.  The success of that transition depended upon the involvement of national security forces.  Disarmament, demobilization and reintegration would require substantial international support.

On the humanitarian front, she said that the number of internally displaced persons had dropped; 81 per cent had left the camps and returned to their communities.  Yet, the situation was generally concerning as it hinged on fragile security.  The conflict had cut the country's economic growth rate by 36 per cent in 2013, plunging it into recession.  She expressed hope that the agreement with the International Monetary Fund (IMF) on rapid disbursement of funds would put the country on a path of growth.  On the political front, she had focused on "disarming hearts and minds" through national reconciliation.  The Ebola outbreak and the spread of Boko Haram and the Lord’s Resistance Army, or LRA, terrorist groups in neighbouring Nigeria and Cameroon were also worrying.

She supported efforts to cut the illegal flow of small arms and light weapons and expressed commitment to fight impunity, noting that her country was a party to the Rome Statute.  She also supported the effort of France and Mexico to limit the veto power in the Council in cases concerning such serious crimes as genocide.  On climate change, she urged Member States to ratify the Doha amendment to the Kyoto Protocol.  Her country backed Morocco on the question of Western Sahara.

Fatal error: Class CToolsCssCache contains 1 abstract method and must therefore be declared abstract or implement the remaining methods (DrupalCacheInterface::__construct) in /mnt/stor18-wc2-dfw1/518089/www.gadebateqav2.un.org/web/content/sites/all/modules/ctools/includes/cs... on line 52