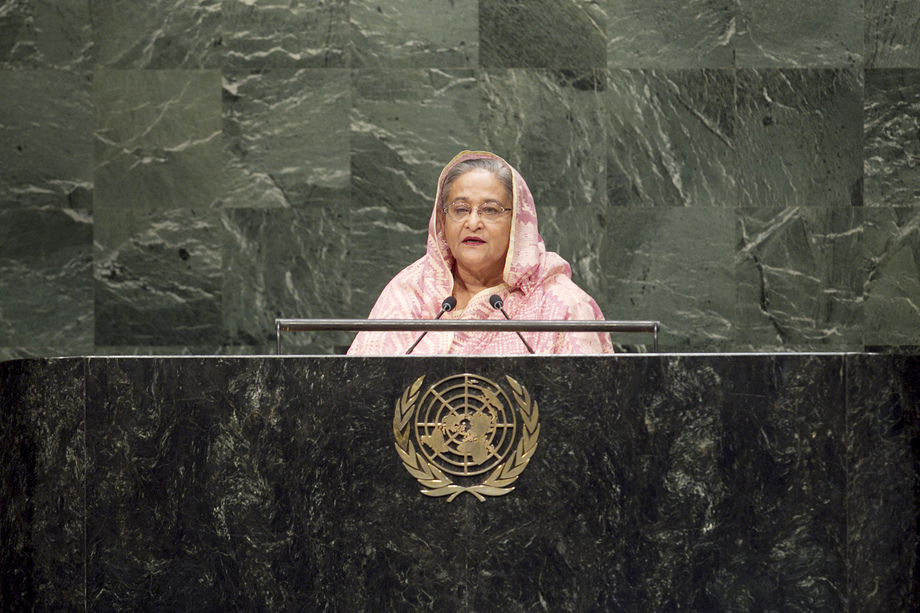 SHEIKH HASINA, Prime Minister of Bangladesh, said that a global order based on peaceful coexistence, social justice and freedom from poverty, hunger, exploitation and justice continued to be her country’s guiding vision in its national development and its engagement with the world.  She expressed her Government’s full solidarity with the Palestinian people.  Bangladesh had so far contributed 128,133 peacekeepers to 54 United Nations peacekeeping missions, as the highest number of women police officers to those operations.

Her Government had created a strong legal and regulatory regime for countering terrorism, she said, adding that, in order to uphold the rule of law and end impunity, crimes committed during the 1971 “liberation war” were being brought to trial.  The Bangladeshi economy had grown during the last five years, and several infrastructure and connectivity projects were being brought to fruition.  Eighteen “economic zones” were being established across the country for potential investors.  With a young workforce, skills development of its population remained a policy imperative for Bangladesh.  By making use of contemporary communication technology, the country was reaching both rural and urban people with crucial public services.

Having made strides in education, Bangladesh had reached the Millennium Development Goal of ensuring universal primary school enrolment, offering students a free education up to the twelfth grade.  Sustainable development entailed women’s equal participation in all parts of life.  Bangladesh’s efforts to promote women’s empowerment were showing results.  A percentage of posts in the judicial, administrative, civil service, armed forces and law enforcement agencies were reserved for women, as were 60 per cent of primary school teacher posts.  Implementation of the Millennium Development Goals had been “uneven” and “unequal” among countries and regions, she said, noting that the eradication of poverty must remain at the centre of the post-2015 development agenda.

Further, the agenda had to meaningfully address the long-standing resource and capacity constraints of low-income developing countries, she said.  No challenge was as formidable as climate change to a country like Bangladesh, where a one-metre rise in the sea-level would submerge a fifth of the country and turn 30 million people into “climate migrants”.  Her country, therefore, had a “crucial need” for adequate, predictable climate financing.  There was untapped potential in the “blue economy”, which would allow coastal and small island developing States to benefit through utilization of marine ecosystems and resources, and her country, therefore, supported its incorporation into the post-2015 framework.