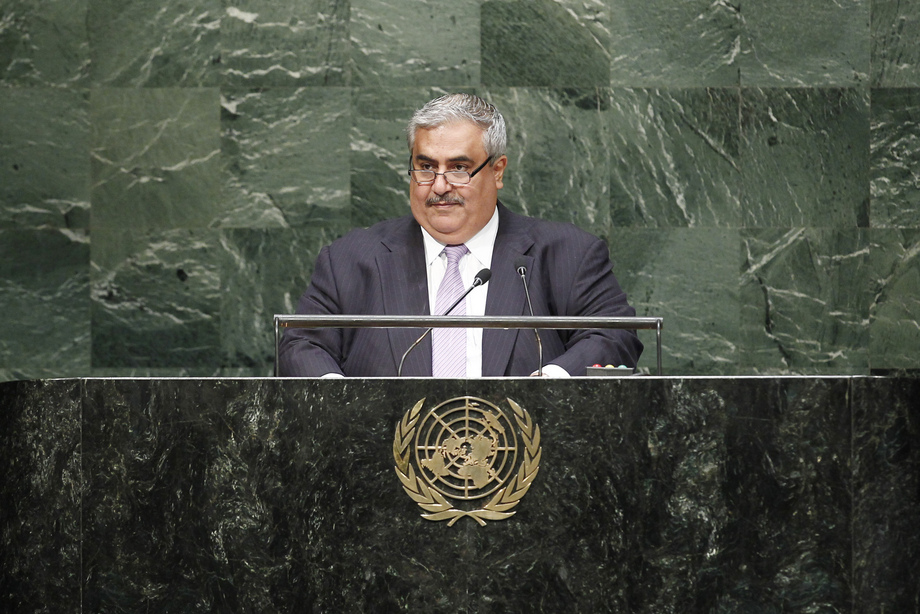 SHAIKH KHALID BIN AHMED AL KHALIFA, Foreign Minister of Bahrain, said his country’s region was going through a phase of extreme difficulty, in which a climate of instability, chaos, tension and savage, bloody and unprecedented terrorism prevailed.  Contributing to those were many factors, the most prominent of which were three challenges.  The first was the accelerated emergence of terrorist groups with various global dimensions and affiliations.  They thrived in the region, not only targeting innocent people, but also carrying out inhumane practices, such as mass murder, public beheadings and the persecution of ethnic and religious minorities.  Combating terrorist groups required the international community to work together in the security, military and financial aspects, and in fighting ideology that deformed human nature and disfigured Islamic principles.

The second challenge to the security and stability of the region was represented by political expansionism and attempts to impose hegemony in disregard of the sovereignty of States, and to interfere in their internal affairs, he said.  The entire region as a result had suffered from attempts to export seditious revolutions and to train terrorists in violation of international law and United Nations principles.  One form of such interference was the use of media, notably satellite television channels and social media, which were misused to distort facts and cause instability in the region.  On Iraq, there was hope that the election of President Fouad Massoum and the formation of the new Government under Prime Minister Haider al-Abadi would enhance the political and development processes and contribute to the security and stability of that country.  Concerning Syria, he said it was necessary to remove barriers that stood in the way of humanitarian assistance.  On Libya, he then expressed concern at the deteriorating security situation there and its repercussion on the stability of its neighbouring countries.  In light of those conflicts, he reiterated the call to make the Middle East a region free of weapons of mass destruction, notably nuclear weapons, and expressed support for the “5+1” group with a view of reaching a swift solution to the Iranian nuclear programme.

The third challenge was the illegal occupation of other States’ territories in contradiction of the principles of international law and the United Nations Charter, he said.  That was notably illustrated by the violations committed by Israel, and its targeting of Palestinian people by confiscating their land and imposing blockades on them.  In that regard, it was imperative to specify a time frame by which Israeli occupation must end, so that the Palestinians may realize their aspirations for an independent State.  Concerning the occupation by Iran of the three islands — Greater Tunb, Lesser Tunb and Abu Musa — belonging to the United Arab Emirates, he rejected that occupation, and called on Iran to heed the efforts of the United Arab Emirates to solve the problem through direct negotiations or through arbitration by the International Court of Justice.