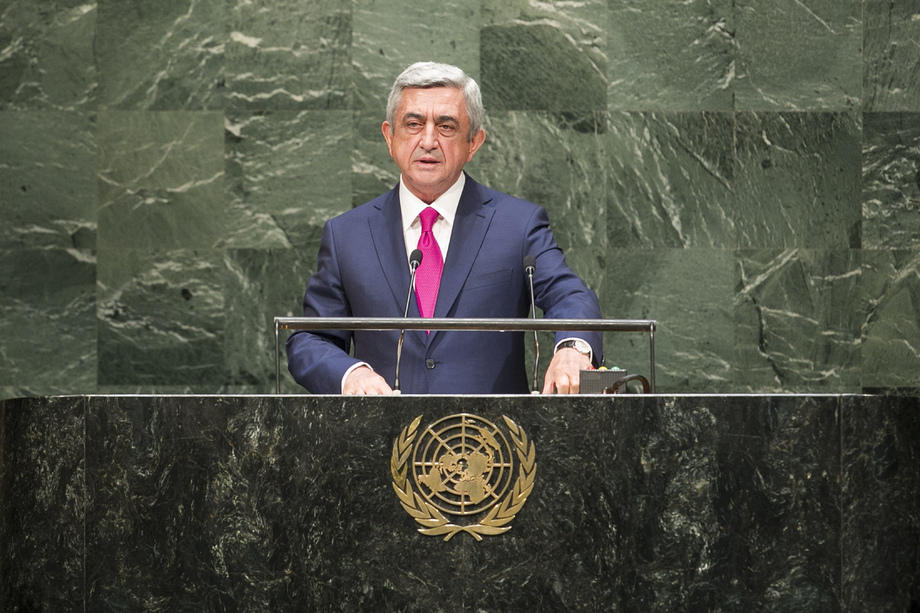 SERZH SARGSYAN, President of Armenia, affirming his country’s support for the initiatives of the President of the General Assembly and the effective shaping of a post-2015 agenda, called attention to the upcoming April 2015 centennial of the Armenian genocide, asserting that inadequate condemnation of the event had paved the way for future crimes of mass murder. He emphatically thanked all those countries and individuals who had recognized and condemned it, “since denial is a phase of the crime of genocide.”

His country had not conditioned normalization of relations with Turkey on recognition of the genocide, and had initiated the process that led to the signing of the Zurich Protocols in 2009, he said. However, the Turkish Government had now declared that it would not ratify the Protocols unless Armenia ceded Nagorno-Karabakh to Azerbaijan. Armenia would not bargain away the motherland, he stated, and there was now consideration of recalling the Protocols from Parliament.

Hate crimes against minorities were now rife in Syria and Iraq, he said, noting that just two days ago, on Armenian Independence Day, the Church of All Saint Martyrs in Deir-ez-Zor, Syria, which was dedicated to victims of the Armenian genocide, had been blown up by terrorists. Tens of thousands of Armenians of Aleppo were imperilled. His country had underlined on numerous occasions the need to defend minorities in Syria and northern Iraq, and he was encouraged by the unified stance of the international community in that regard.

Returning to the issue of Nagorno-Karabakh, he said that it was now more than 20 years since Azerbaijan, through a “maximalist stance” and bellicose statements, had obstructed the efforts of the international community to bring about a just and peaceful settlement. Azerbaijan was exploiting the four Security Council resolutions on the issue to justify their obstruction, even though that country had failed to implement their fundamental provisions and was gravely violating humanitarian norms by its cruel treatment of Armenian civilian prisoners.

He maintained that the recent vote held in Scotland had once again proved that referendums were increasingly seen as a legal model for the settlement of ethnic conflicts. A referendum was the core element of the proposal on the Nagorno-Karabakh conflict put forward by the Co-Chairs of the Minsk Group of the Organization for Security and Cooperation in Europe (OSCE), the only specialized structure mandated by the international community to deal with the conflict. He criticized attempts to move the issue to other platforms and depict it as a territorial dispute or a matter of religious solidarity.