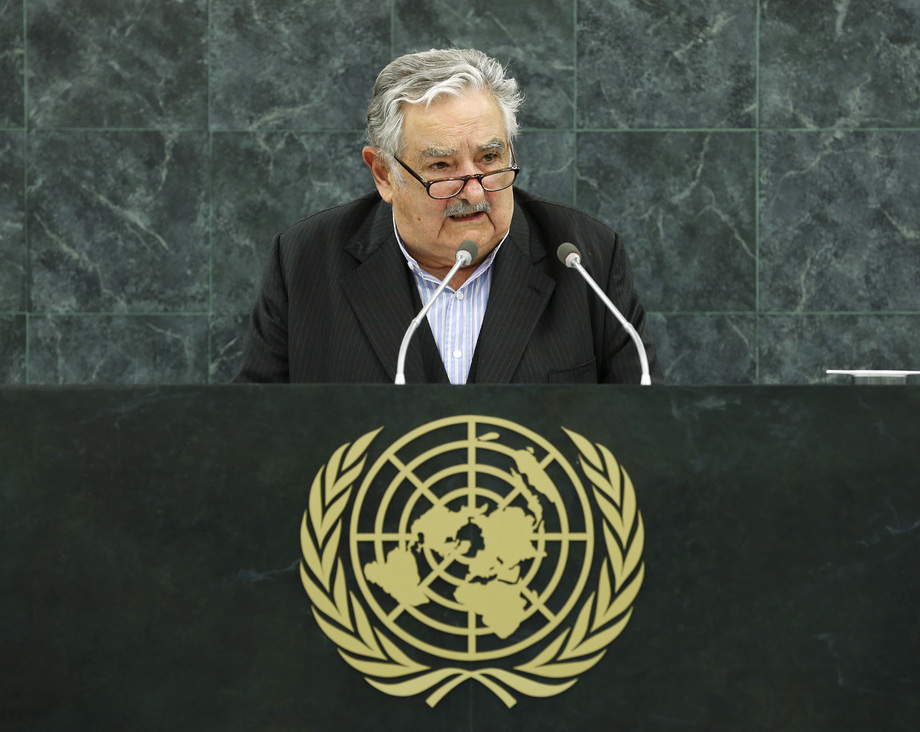 JOSÉ MUJICA, President of Uruguay, said that he came from the South, from the corner of the Atlantic and the Plate River. His country was gentle, temperate and plain, and a place where livestock grazed. Its history was one of ports and leather, of wool and salted meat. He said that for almost fifty years, the world saw Uruguay as a type of Switzerland, but in reality it was in economic tatters. He went on to say that when the British Empire ended, his country experienced the bitter and terrible terms of trade, and it yearned for the past. Today, he said that Uruguay had re-emerged in the globalized world, having learned from past pain. He stated that he came to this Assembly from the South with a huge social debt, and a need to defend the Amazon, the seas, and the great rivers of America. He said it was also his duty to fight on behalf of the fatherland of the Americas, and so that Colombia could finally regain peace. It was necessary, he said, to fight against the dirty economy, against drug traffickers, theft, fraud and corruption, and all contemporary scourges. He added that modern life seemed to operate on an opposite set of values, run by those who maintain that “we are happier when we are richer, no matter what means are used”. However, he said humanity had sacrificed the old immaterial god and now occupied the temple of the “market god”. According to him, when people could no longer consume, they were struck by a feeling of frustration, suffered from poverty and were marginalized. But for everyone to consume the way that the average American did, three planets would be needed in order to live, he added. He said that civilization had mounted a deceitful challenge and that it was not possible for everyone to achieve the fulfilment promised by the market culture. He noted that civilization was destroying the green jungles and creating anonymous concrete ones. He asked whether people were happy, noting there was marketing for everything and everything was business. He said that the average modern inhabitant of large cities wandered between financial institutions and the routine of offices, dreaming of vacations, of freedom, of being able to pay his bills. Today he said it was time to begin to fight, and to prepare for a world without borders. The globalized economy had no other inclination but that of the private interests of the very few, he noted What was needed, he said, was to redefine working hours, converge currencies, finance the global struggle for clean water, battle desertification, recycle more, and counter global warming. He said the international community needed a combination of lofty politics and scientific wisdom, with intelligence at the helm. Today, war was inevitable when politics failed, he said. Every minute, 2 million dollars was spent on military budgets, while funding for medical research made up only a fraction of that, he added. There was a great deal of energy in the world, he said, if only the world could work together to use it properly. He noted that poverty could be eliminated from the planet if future generations could begin to reason as a species, not just as individuals.