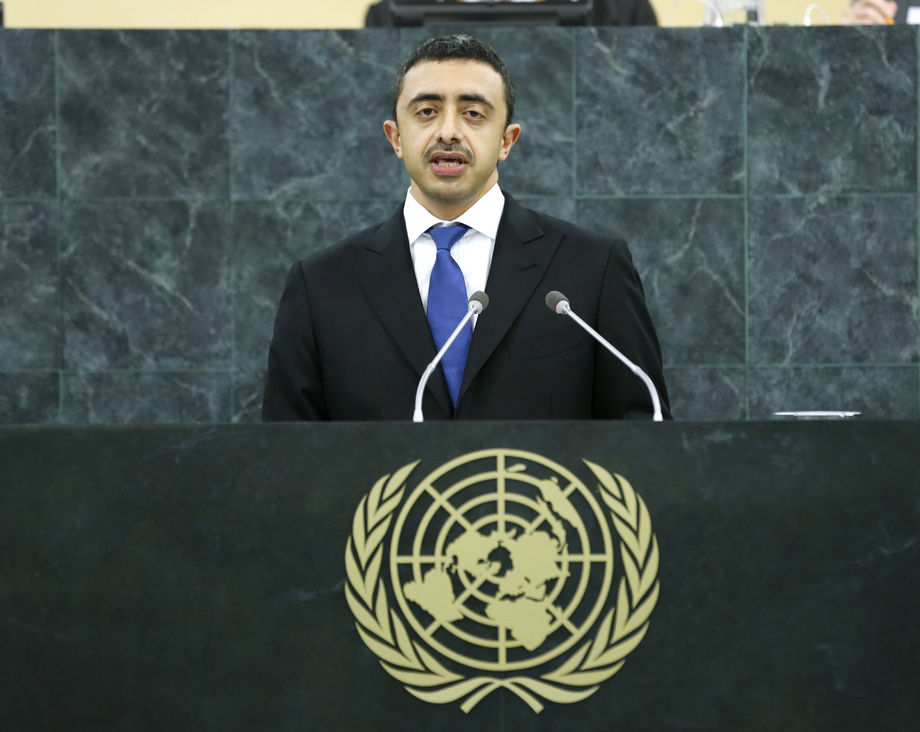 Abdullah bin zayed al nahyan, Minister for Foreign Affairs of the United Arab Emirates, expressed his deep concern for the recent events in the Arab region, associated with sectarian strife, escalated terrorist attacks and growing incitement to violence. In the Arab Gulf, extremism and terrorism in Bahrain were “destroying a history of tolerance”, he said. It had become, therefore, even more important for his country to promote a culture of moderation and non-violence. A concrete step in that respect had been the establishment of the Hedayah Centre for Countering Violent Extremism. His country had been “deeply disappointed” by the inability of the international community, until now, to put an immediate end to the tragedy of the Syrian people. The United Arab Emirates strongly condemned and rejected all crimes against humanity “committed by the Syrian regime, especially the chemical attack”, he stressed. He said his country was following with great interest the positive developments taking place in Egypt, as it believed in the pivotal role of that country in ensuring stability, development and prosperity for the whole region. The measures taken by the Egyptian Government to protect national security and implement the “popularly supported road map” gave grounds for optimism. The suffering in the Arab region was affected by the interference of others. He encouraged the interconnected nature of the issues to be taken into account. The Palestinian people were still seeking self-determination and he hoped that renewed talks with Israel would lead to a positive result, namely, the establishment of a Palestinian State. Also worrying was the “continued Iranian occupation” of three of his country’s islands — Abu Musa and the Greater and Lesser Tunbs — and he demanded the restoration of the United Arab Emirate’s sovereignty. His country, he went on, firmly believed in the importance of human development at the national and international levels, which could only be achieved through the respect for human rights and equality among all people, regardless of gender, ethnicity and religion. In that context, he was encouraged by the unanimous adoption by the Human Rights Council of its universal periodic review report. On a final note, he said that the empowerment of women, the recognition of their central role in communities and their protection against discrimination were imperative, and his country was proud of the significant measures it had taken in that regard.

The representative of the United Arab Emirates said he was forced to take the floor in response to the “illegal and false allegations” made by Iran claiming its sovereignty over Abu Musa, Greater Tunb and Lesser Tunb.  His Government had time and time again expressed its alienable position with respect to the occupied islands.  The annual statement made by the Iranian delegation in the hall ran counter to all historic facts and demographic and geographic records, which proved that the ownership of those three islands went to the United Arab Emirates.  Consequently, his country would never abandon its legal and political status in those islands; they were part and parcel of the Emirates’ national sovereignty and territorial integrity, and he rejected all escalating and illegal measures taken by Iran over the course of the past four decades.  He called on the international community to urge Iran to solve the problem through the means previously suggested, either through direct negotiations or arbitration, or by resorting to the International Court of Justice.  Economic prosperity in the Arab Gulf region necessitated neighbourliness and non-interference in nations’ internal affairs.