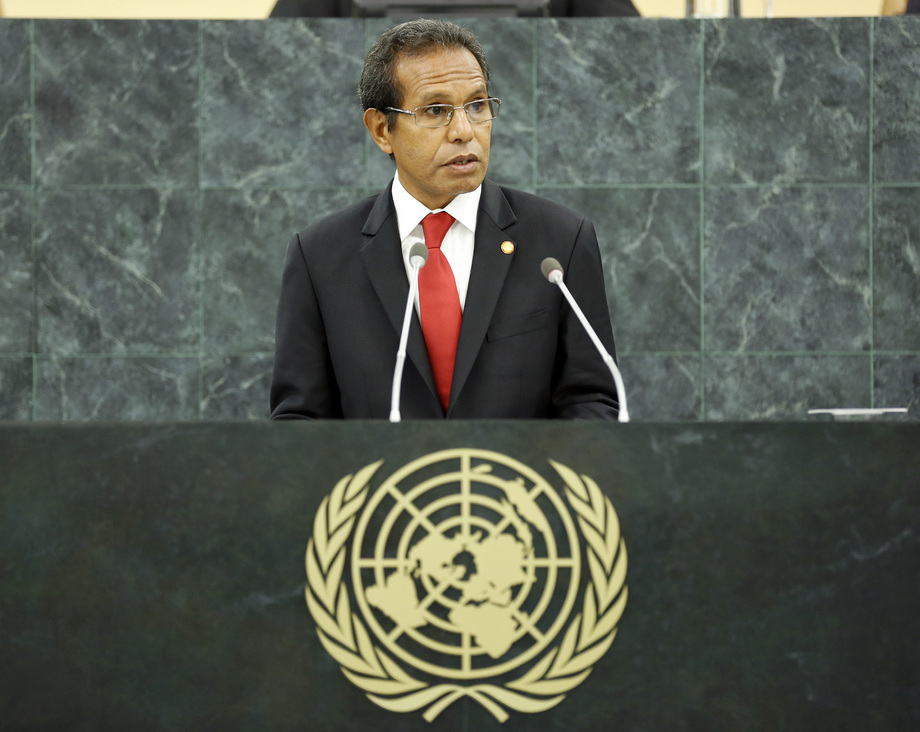 TAUR MATAN RUAK, President of Timor-Leste, said his country’s experience showed the great value of the United Nations and the importance of negotiated solutions, dialogue and diplomacy to international disputes. This was the first year with no United Nations mission in the country, as the partnership between Timor-Leste and the United Nations had achieved remarkable successes. Now, the Timorese people were responsible for their own national development, focusing on economic diversification, the promotion of inclusive development and the consolidation of national institutions through improved technical capacities and greater participation of the younger generation. Relations with the United Nations would remain strong, but would focus on assisting with human, social, and economic development and the strengthening of institutions.

Timor-Leste was integrating internationally, he said, pointing to participation in the establishment of the “g7+” group, which promoted a new model of engagement between fragile States and other international stakeholders. The “New Deal for Engagement in Fragile States”, promoted by the body, had been well received by the United Nations, development partners and international organizations. Timor-Leste had friendly relations with countries in South-East Asia and the Pacific, particularly Australia and Indonesia, and its reconciliation with Indonesia could be a relevant model across the world. Timor-Leste had applied for membership in the Association of Southeast Asian Nations (ASEAN); it was a member of the Non-Aligned Movement and a special observer at the Pacific Islands Forum; and its representatives had been elected to chair the Economic and Social Commission for Asia and the Pacific (ESCAP) and the Community of Portuguese Speaking Countries.

Turning to the situation in Syria, he welcomed the agreement reached on chemical weapons and expressed support for negotiation. The United Nations should improve its ability to respond to such crises and adapt its composition to better reflect the realities of the twenty-first century. New Powers like India, Indonesia and Brazil should be permanent members of the Security Council, while smaller countries should also be better represented. To that end, he supported New Zealand’s candidature for a non-permanent seat, starting in 2015.

While Timor-Leste had recently celebrated the fourteenth anniversary of its self-determination referendum, he regretted that the Saharan people of Western Sahara had been waiting for decades. Touching on several other issues of importance, he expressed support for the right of the peoples of Palestine and Israel to live side-by-side in peace, dignity and in safety and welcomed resumption of direct talks leading to the establishment of two sovereign States. He called for an end to the United States’ embargo against Cuba and for the release of Cuban citizens imprisoned in the United States. He hoped that the recent easing of political and social tensions in Guinea-Bissau would pave the way to the re-establishment of institutional normalcy and democracy. He welcomed the efforts of the United Nations Peacebuilding Support Office in Guinea-Bissau (UNOGBIS), and he offered his support for intensified dialogue and reconciliation.

He highlighted the problem of malnutrition that affected hundreds of millions of people worldwide. To achieve food security and reduce malnutrition on a global scale, a boost was needed, with coordinated initiatives and greater investment. Also important was progress in meeting the Millennium Development Goals and establishing a post-2015 development agenda. He followed the establishment of the new agenda closely and welcomed the invitation to his Finance Minister to participate in a high-level panel on the matter.