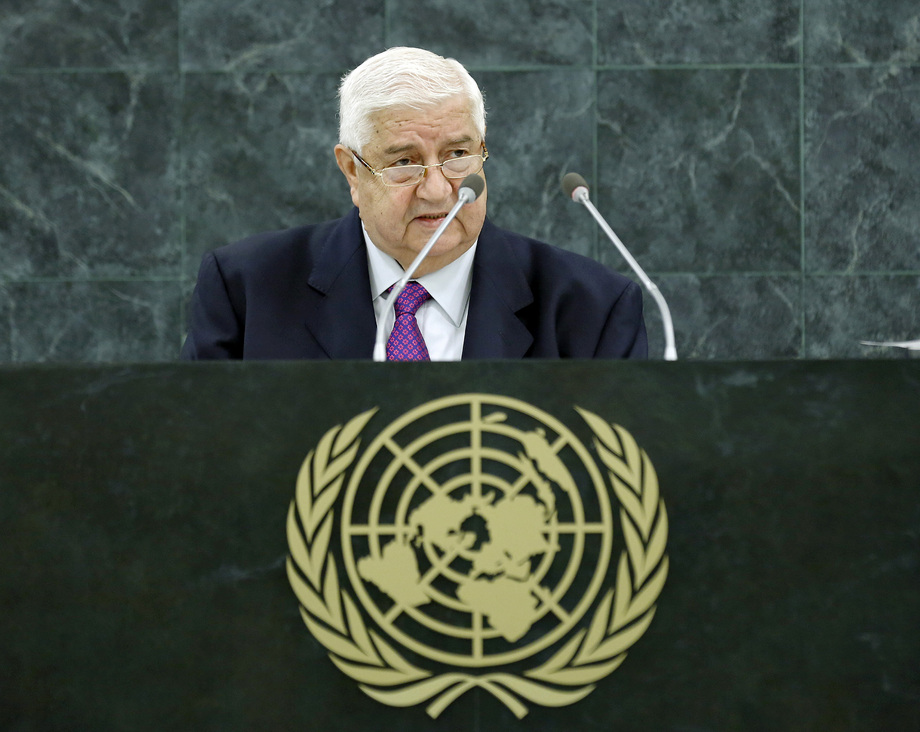 WALID AL-MOUALEM, Deputy Prime Minister and Minister of Foreign Affairs and Expatriates of Syria, noted that many countries still faced political, financial and economic crises that exceeded their abilities to confront on their own. “Instead of settling regional and international conflicts by peaceful means, some known countries continue pursuing aggressive policies against certain nations,” he said. “Political hypocrisy increases to intervene in the domestic affairs of States under the pretext of humanitarian intervention or the responsibility to protect.” And when those aggressive policies did not prove beneficial for some countries, like Syria, those well-known States “reveal their true face and threaten with blatant military consensus”. Those same countries were supporting terrorism in Syria. “There is no civil war in Syria,” he declared, reiterating that the war was being waged against terrorism. The international community should act in accordance with the relevant resolutions on counter-terrorism and take measures to compel the countries financing, arming, training and providing safe havens and passage for terrorists. “We were the ones targeted by poisonous gases in Khan al-Assal, near Aleppo,” he said. Syria had requested an investigation mission and demanded the inclusion in its mandate the ability to determine who had used chemical weapons, but the United States, France and the United Kingdom had limited the mission’s functions to deciding whether chemical weapons had been used. The mission had been awaited for more than five months and then withdrawn before completing its work. He applauded the initiative by the President of the Russian Federation and called attention to the fact that Syria, by acceding to the Chemical Weapons Convention, had proven its opposition to their use. “However, there remains the challenge that is facing all of us whether those who are supplying terrorists with these types of weapon will abide by their legal commitments, since terrorists who used poisonous gases have received chemical agents from regional and Western countries that are well known to us,” he said. Recalling that his country had repeatedly announced its willingness to seek a political solution to the crisis, he underlined the Syrian people’s right to choose their leadership and rejected all forms of foreign interference in its domestic affairs. On displaced persons, he said that, in some countries, they had been placed in military training camps or places resembling places of detention. He called on Syrian citizens to return home, where the State would guarantee their safe return and livelihoods. Calling for a return to the 1967 line in the occupied Syrian Golan, he confirmed his country’s support for the right of the Palestinian people to an independent State. Syria also renewed its call on the international community to work on establishing a Middle East zone free of all weapons of mass destruction, which could not be achievable without the accession of Israel, the region’s only nuclear Power, underlining also the “right of all countries to acquire and develop nuclear technology for peaceful purposes in accordance with the Nuclear Non-Proliferation Treaty”. The United States and the European Union should refrain from imposing immoral economic measures that contradicted the rules of international law and the principles of free trade, and accordingly lift the embargo on Cuba, as well as all unilateral coercive measures imposed on Syria, Venezuela, Belarus, Iran and the Democratic People’s Republic of Korea. Syria looked positively upon efforts by the United States and Iran to bridge the gap of mistrust and hoped it would reflect constructively on the stability of international relations, he said.