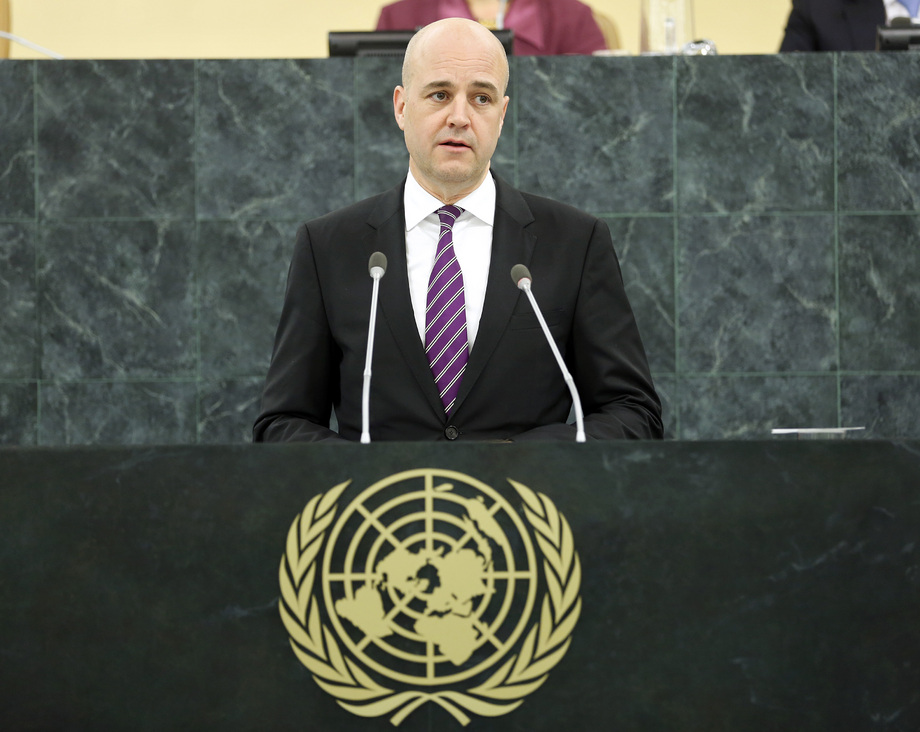 FREDRIK REINFELDT, Prime Minister of Sweden, said the rapidly-changing world was already a very different place from what it had been when the Millennium Development Goals had first been set. It was important to understand the nature of those changes in order to have influence and shape the future. The world was currently witnessing the fastest reduction in poverty in human history, child mortality rates had fallen, and deaths from malaria and tuberculosis were decreasing, as were new HIV infections. Sweden’s average life expectancy 100 years ago had been below 60, while many children born today would celebrate their 100th birthdays. Those were amazing developments, he said. The world economy was growing and this year developing countries’ share of it would surpass that of developed countries, he continued. Technological change was also rapid, and the number of mobile phone users had risen from less than 1 billion to more than 6 billion, he noted. However, there remained plenty of challenges, and it was crucial to intensify efforts to achieve the Millennium Development Goals.

He said the issue of gender equality was first and foremost a question of ensuring the same human, economic and social rights for half of the world’s populations. However, a billion women were subjected to sexual or physical violence every year. Women were denied equal access to health services, including sexual and reproductive health and rights, and every day, 800 of them died from preventable complications related to pregnancy and childbirth. Further, legal restrictions prevented women from owning, inheriting or acquiring property in many countries, while many girls and women were refused access to education. Against that background, Sweden had been one of the strongest supporters of and biggest donors to UN-Women, since ensuring gender equality was also a way to improve a country’s productivity, economy and rule of law. Educating girls and women led directly to increased national economic output, and closing the gap between male and female employment substantially increased GDP. “To be clear, it is neither acceptable nor very smart to discriminate against women and girls,” he emphasized.

To achieve sustainable development, there was a need for democratic governance encompassing all individuals, he said. Every person’s human rights must be respected regardless of origin, religion, handicap, gender, sexual preference or transsexual identity. It was only when people could freely express their political opinions that they could truly participate in a thriving civil society; only with functioning courts could they make safe business investments; only with respect for the rule of law could organized crime and corruption be tackled; and only through democratic principles could freedom from conflict be ensured. Violence and oppression were among the main threats to societal development, which was why conflict was sometimes called “development in reverse”, he noted.

There were currently several conflicts causing death and suffering, hunger and disease, rape and sexual violence, while depriving men, women and children of their right to a prosperous life and a future of hope, he said. The war raging in Syria must come to an end, and those responsible for the systematic violence — including the use of chemical weapons — must be held accountable. It was time for a new era in which countries in conflict could join the rest of the world in achieving the Millennium Goals, and for that, the international community needed a strong United Nations, including a well-functioning Security Council, he stressed.

Regarding the post-2015 agenda, he said protectionism was very expensive, as it raised prices and lowered standards of living. According to the World Trade Organization, consumers in rich countries paid $350 billion a year to support agriculture — enough to “fly their 40 million dairy cows first class around the world”. Sweden was working hard to get a transatlantic deal in place, as freer trade and openness meant that new impulses and trends affected a country faster. Trade also helped with peaceful relations, since no salesperson wished to start a war against a country in which it had customers. It was everyone’s duty to strive for a society that gave everybody the chance create his or her own future, because people were the true wealth of a nation, he said in conclusion.