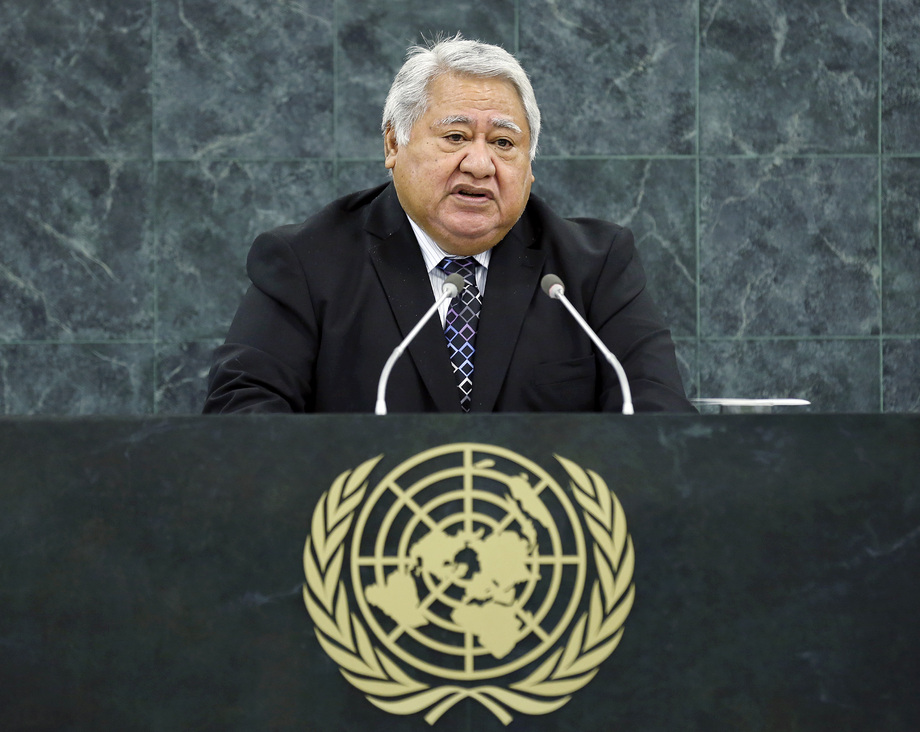 TUILAEPA SAILELE MALIELEGAOI, Prime Minister of Samoa, said climate change was perhaps the greatest threat facing the world today. Climate change was a security risk of far greater proportions than many people were prepared to admit, he said, explaining that it could well lead to the eventual extinction of some low-lying Pacific islands. While its root causes and solutions to address them were widely known, the “continued triumph of vested interests in preventing and delaying the action that must be taken” was saddening. Samoa looked to Member States in leadership roles to rise to the challenge and lead by example in ensuring that the post-2020 climate change convention currently under negotiation would effectively address the mounting fears of countries under threat.

Regarding his country’s signing of the Arms Trade Treaty two days ago, he welcomed the fact that more than 100 nations, including the United States, had now signed the instrument. “For small island countries like Samoa, it only takes a few small arms and light weapons in the wrong hands to cause instability,” he noted. Indeed, those so-called small arms had fuelled conflicts in the Pacific region and disrupted the lives of communities, impeding national development. Signing the Treaty was testimony to Samoa’s commitment to “general and complete disarmament” that would contribute significantly to saving lives, stopping human rights abuses and avoiding crises. It was also an important step towards reducing and eventually eliminating the human cost of conventional arms altogether.

Samoa looked forward to next week’s High-Level Meeting on Migration and Development, he said. International migration provided both challenges and opportunities for origin, transit and destination countries. Its contribution to sustainable development would, therefore, ultimately depend on the willingness of source and destination countries to work out imaginative and human arrangements beneficial to both as well as to migrants. In that regard, Samoa was working closely with New Zealand and Australia, through their seasonal workers schemes, to ensure that such important initiatives resulted in mutual benefits for the sending and receiving parties.

Recalling yesterday’s high-level on nuclear disarmament, he said it had highlighted yet again the urgent need to conclude a treaty banning nuclear weapons, given the catastrophic humanitarian consequences of their use. “Such weapons represent the great paradox of our time,” he declared. “While nations desire peace and talk peace, far more of the national wealth goes towards the development and acquisition of ever more sophisticated and destructive weapons of mass destruction.” He reaffirmed Samoa’s continued support for a nuclear-free world. Samoa also had faith in the rule of law and the vital protection it offered to all States, especially weak and small ones without armed force or affiliation with any military grouping.