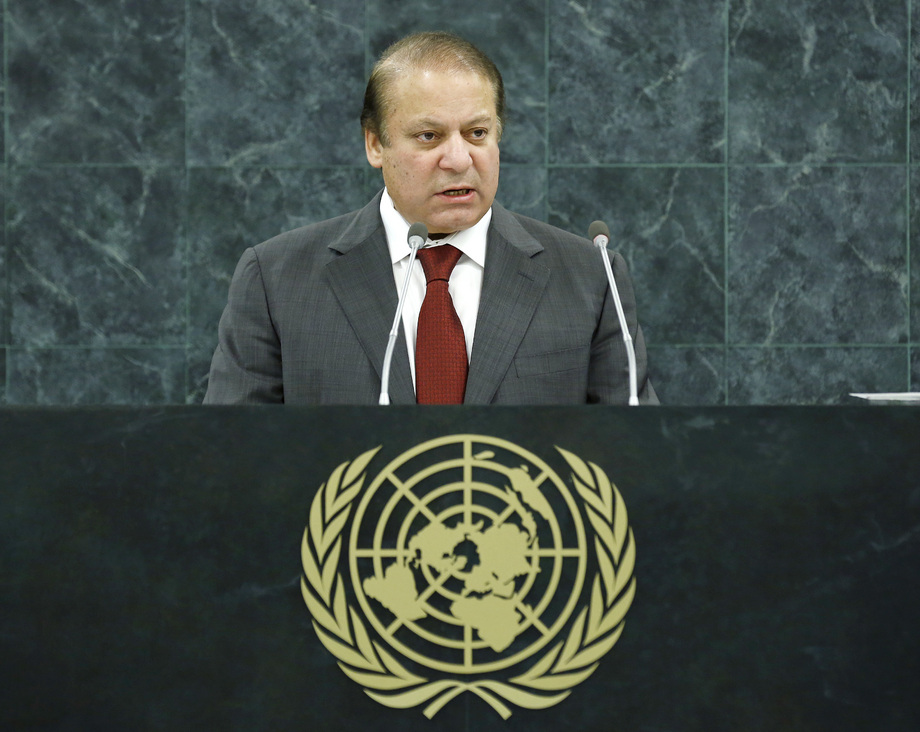 MUHAMMAD NAWAZ SHARIF, Prime Minister of Pakistan, said he felt exonerated after long years of “exile, exclusion and State oppression”. Pakistan could now boast a strong parliament, an independent judiciary, a free media and a vibrant civil society, but there was no room for complacency. Democracy needed constant vigilance and strong institutions.

He ardently supported the United Nations, calling for reform in the interests of all Members. The Security Council needed to be equipped to face a dynamic future and the role and authority of the General Assembly also needed restoration and revitalization. The latter body’s influence had improved for responding to peace and security, development and climate change issues. The United Nations was vital to resolving “festering disputes”, like Jammu and Kashmir, which was first presented to the Security Council in 1948. Kashmiris had the right to self-determination and to decide their own futures peacefully, in line with Security Council resolutions. He looked forward to re-engaging with India, highlighting his plan to meet India’s Prime Minister, Manmohan Singh in New York.

He said he had recently met President Hâmid Karzai of Afghanistan and expressed support for an inclusive, Afghan-led, Afghan-owned peace process, aimed at national reconciliation. He would not interfere in Afghanistan’s internal politics and said Pakistan’s commitment to Afghans was clear in its continued hosting of millions of refugees. Turning to the Middle East, he looked forward to Palestine becoming a full Member State of the United Nations and expressed solidarity with the Palestinian people. Syria’s Government and opposition needed to move to the negotiating table in Geneva to prepare for national reconciliation and political transition, he said, condemning the use of chemical weapons and welcoming the recent Security Council resolution. Pakistan would continue its policy of Credible Minimum Deterrence on nuclear weapons and his position on the Fissile Material Treaty was based on strategic stability in South Asia.

He condemned terrorism, citing the 40,000 Pakistanis who died through terrorism, and the colossal damage done to social and physical infrastructure. He would use any means to combat terrorism but preferred dialogue. Winning hearts and minds, particularly of the youth, was important. Combating terrorism required adherence to international law and armed drone strikes violated Pakistan’s territorial integrity. He added that terrorism had no religion, so profiling of Muslims as terrorists was the “most insidious form of contemporary racism”. Stereotyping had to stop.

He said the post-2015 development agenda should set benchmarks on poverty alleviation, sustainable development and social inclusion, and address climate change. Pakistan had the natural resources to drive an economic revolution but challenges like overcoming the volatile security environment, correcting structural imbalances in the economy and ending energy shortages needed tackling. He did not seek more international aid, instead preferring better trade, market access, investment and partnerships. Education was vital to driving socioeconomic development and a new National Health Service would improve that sector. Women’s participation and rights needed to expand, while investment was needed in education and skills for the youth, who made up 63 per cent of Pakistan’s population, and tolerance was needed for minorities. Due to Pakistan’s susceptibility to natural disasters, he had launched a ten year National Disaster Risk Reduction Policy, characterized by its proactive and anticipatory approach.

The representative of Pakistan said that, on 27 September, the Prime Minister of Bangladesh had used the General Assembly forum to make references to Pakistan that were not supported by facts.  He was deeply dismayed by the statement because Pakistan and Bangladesh were brotherly countries, and at one point, they were the citizens of one country.  Even today, there was warmth and goodwill between the peoples, and multiple channels of communication were open between the two Governments.  Bangladesh’s statement had contained a misrepresentation of facts.  Raising an issue that had little relevance in contemporary relations was counterproductive.  Despite that, the Government and the people of Pakistan would work to strengthen friendly ties with their counterparts in Bangladesh.