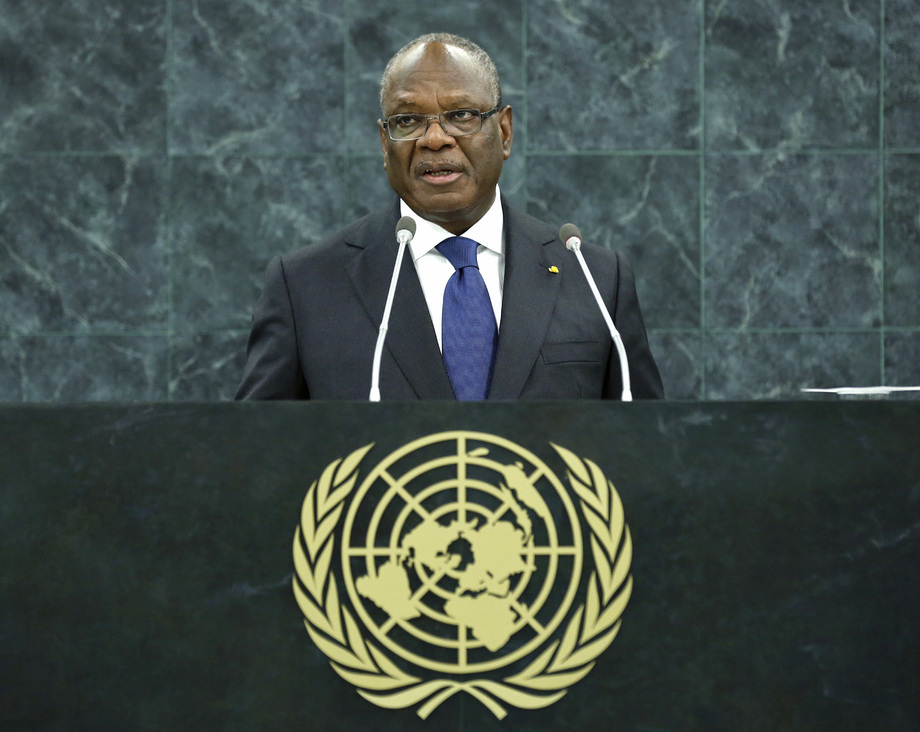 BOUBACAR KEITA, President of Mali, paid tribute to the various international organizations — including the United Nations, regional organizations, States and military forces — that had worked to find a solution to the crisis in Mali. He said that despite the “jihadist aggression” Mali was looking ahead calmly, reasonably and confidently. With the support of friendly States, Mali was ready to stand tall. A path to national reconciliation had begun, with processes launched through the Ouagadougou Accords. Recent presidential elections had completed the political transition, and the elections had been confirmed as credible and transparent. Legislative elections were slated for the end of 2013 with the aim of finalizing the process.

He understood the yearning of the people for reconciliation and development and had held meetings with the chiefs of Northern armed groups in Bamako. There, he had reminded them of Mali’s territorial integrity and the State’s secular nature. Candid, inclusive political dialogue, he said, was in the cards with everything on the table except for any form of independence for the North. Decentralization was one route to improving inter-communal relations, as local authorities would have more control over resources. Eventually, a national conference would discuss the North. International support was needed to continue national reconciliation, particularly reforms needed for the security sector and Mali’s institutions. The justice system had received particular emphasis with the aim of convincing Malians that they lived in a place where the rule of law would prevail.

He said Mali’s situation was symptomatic of the wider situation across the Sahel, where trafficking of drugs, arms and humans was rife. Some very advanced weaponry was passing through the country, and small terrorist groups were marauding. The United Nations Multidimensional Integrated Stabilization Mission in Mali (MINUSMA) was deployed to counter that threat, and he congratulated the United Nations, and especially the Security Council, on a successfully-run mission. Now Mali was at a crossroads. He welcomed the report of the Secretary-General’s Special Envoy, Romano Prodi, and stressed the need for strengthened cooperation among States of the region against religious extremism and organized crime.

The Assembly’s focus on the post-2015 development agenda spoke to the uncertainties and anxieties facing the world due to economic instability, environmental deterioration and natural disasters. Ten years after adoption of the Millennium Development Goals, insufficient results had been seen. Particularly lacking had been commitment to Millennium Goal 8 on global partnerships for development. An open and equitable trading system was vital to future progress and the new agenda needed to prioritize poverty eradication and environmental and social sustainability.

Despite the United Nations work on reform, more was needed, especially regarding the Security Council and revitalization of the General Assembly. The General Assembly was the main deliberative body and needed to occupy a central position. It needed the means to implement its resolutions. He expressed his support for the African Union’s Ezulwini and Sirte Declarations, which called for two new permanent seats for Africa and five new non-permanent members. Such an arrangement would better reflect existing geopolitical realities and repair historical injustices. He underlined the fact that Africa was currently the only region lacking a seat.