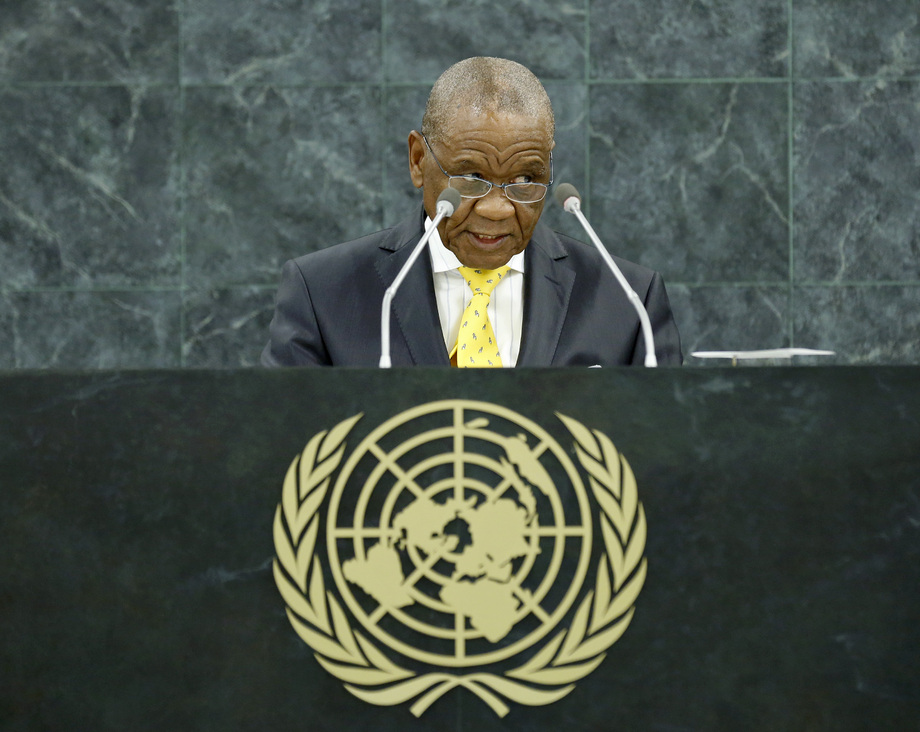 MOTSOAHAE THOMAS THABANE, Prime Minister of Lesotho , observed that little progress had been made in many countries in achieving the Millennium Development Goals. For that reason, he welcomed the current Assembly session’s theme: “The Post-2015 Development Agenda: Setting the Stage”. That agenda must be an integral framework that would build upon the success and failures of the Millennium targets. “It is time for this august body to come together and exercise its collective responsibility to finalize this shared goal of articulating and shaping a development agenda that is inclusive and people centred,” he said. The new agenda must be premised upon the sovereign equality of all States, while recognizing their interdependence and mutually reinforcing roles.

Equally important, in his view, was the need to pay special attention to the perils of climate change on the physical world, as well as the destruction of its ecosystems, all of which resulted in land degradation and contributed to the decline of agricultural productivity. Agriculture was the mainstay of small economies, such as Lesotho. In order to address that challenge, agriculture and food security must be given the necessary prominence in the envisaged development agenda. Likewise, sustainable mountain development was an imperative for people’s survival in countries like Lesotho, where more than 60 per cent of the land area was covered by mountains.

The state of peace and security in the world was gradually getting worse, he said. Possession of nuclear weapons and other weapons of mass destruction remained the principal threat to humanity’s survival. The widespread sectarian strife in the Middle East and elsewhere, coupled with xenophobia, were some of the great challenges to global peace. “Sadly, discord remains among UN Member States on how to overcome these problems,” he said. Of particular concern in that regard, was the situation in Syria, which posed a serious and growing threat to international peace and security. That crisis had the potential to engulf the whole Middle East region with global ramifications. The international community must find a quick and lasting solution to the conflict.

“Whether in Syria or anywhere else, perpetrators of crimes against humanity must be held legally accountable for their actions”, he asserted. A decade had passed since the responsibility to protect concept had been initiated. But, it had yet to become a reality. The fact that crimes of mass atrocity continued to be committed around the world was a stark reminder that now was the time for a collective approach to protect populations from genocide, war crimes, ethnic cleansing and crimes against humanity. From the Horn of Africa and across the Sahel Region to the Democratic Republic of the Congo, Africa was facing a rise in lawlessness and conflicts. When celebrating the jubilee of the formation of the Organization of African Unity (OAU), African leaders had resolved to build a safe, secure and peaceful Africa from now into the future.

With the presence of extremist groups and terrorist entities in the Middle East and elsewhere, terrorism continued to pose a serious threat to world peace, security and development, he said. He condemned the recent “barbaric” killings of innocent people in Nairobi by Al-Shabaab. In face of the numerous global challenges, promotion of a more effective global governance must be at the forefront of the international agenda. “We, the membership of the UN should strive for an international organization with improved efficiency and effectiveness,” he said.