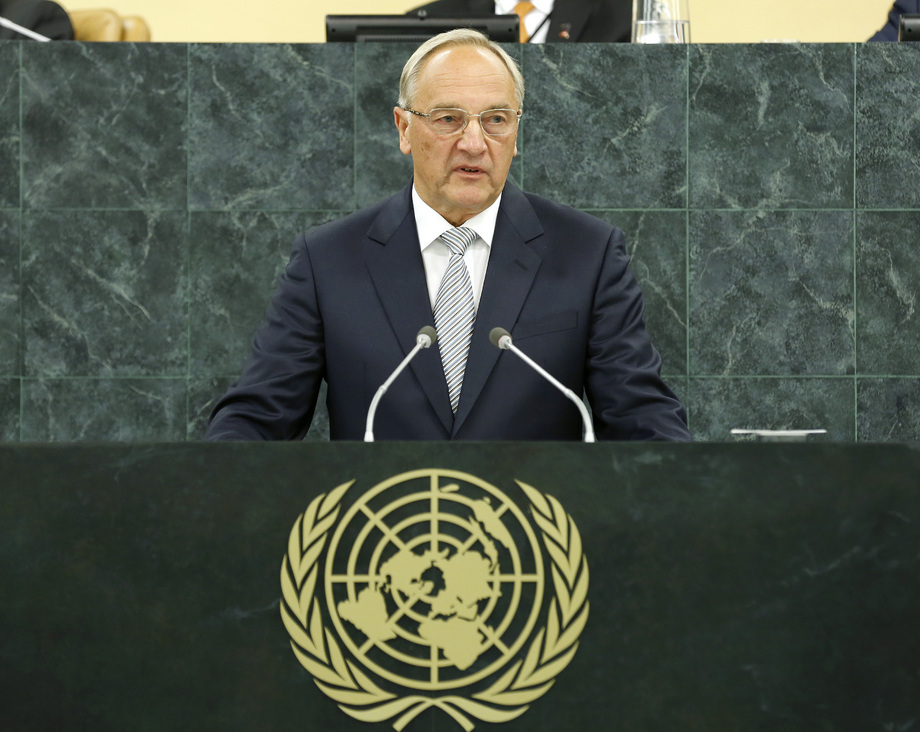 ANDRIS BĒRZIŅŠ, President of Latvia, said that fragile, conflict-affected and least developed countries faced the biggest difficulties when it came to ensuring sustainable development. He stated that growing evidence had shown that progress on the Millennium Goals was impossible without first achieving peace and security, and thus, one of the cornerstones of the new post-2015 vision would be ensuring a decent life and the enjoyment of human rights through those “basic conditions”. The United Nations, he added, should continue to play a leading role in peacebuilding and promoting the settlement of disputes, which was also high on the agenda. He said the wider Middle East stood at a crossroads, and events in the region had a global impact. The international community, he said, must take decisive action. Deploring the continuing humanitarian catastrophe in Syria, he said that easing human suffering there was an immediate goal, and he commended international efforts to that end, particularly the hosting of Syrian refugees by neighbouring countries. He noted that the use of chemical weapons in Syria had been confirmed by United Nations inspectors, and those who committed war crimes and crimes against humanity in Syria must face the International Criminal Court. He added that the agreement reached by the United States and Russian Federation on the framework to eliminate Syria’s chemical weapons should be reflected in a United Nations Security Council resolution, with a clear indication that Chapter VII of the Charter would be invoked in the case of non-compliance. On other regional matters, he encouraged the new Iranian leadership to address the concerns of the international community and welcomed that Government’s stated determination to resolve the nuclear issue, thus building confidence in the peaceful nature of its nuclear programme. He also welcomed the reopening of direct Middle East peace negotiations between Israel and Palestine, and anticipated a peaceful settlement with two countries living side by side in peace and security. Furthermore, he noted that efforts to resolve conflicts in Moldova, Georgia and Nagorno-Karabakh should also be increased and remain high on the international agenda. He said Latvia was stepping up its assistance to Afghanistan and other Central Asian States, particularly in the areas of transportation and customs, as further integration of those countries into the global economy could be achieved by developing international trade routes. The Northern Distribution Network already connected the region with Europe through Latvia, and he was confident it could become a commercially viable long-term transit corridor after 2014. He added that the international community must remain committed to Afghanistan, and Latvia would continue its own support to that country’s police and military. Regarding sustainable development, he said that it went hand in hand with prosperity. During a recession, structural reforms, budgetary discipline and economic stimuli were what brought results. But, while there were signs of recovery, he said that there was no room for complacency. He stated that robust economic growth could be ensured by providing quality education to the younger generations, as this was the foundation on which peaceful, prosperous and dignified societies were built. After the 2008 economic downturn, he noted that, since 2011 Latvia has been among the fastest-growing European Union economies and that growth was expected to continue. Among the key drivers in the expansion, he cited an empowered civil society and the country’s engagement in the national decision-making process, including through Internet freedom. He noted that Latvia stood ready to contribute to the most fundamental post-2015 development goals — those of promoting peace, human rights and fundamental freedoms — and was submitting its candidature for the 2014 elections of the Human Rights Council.