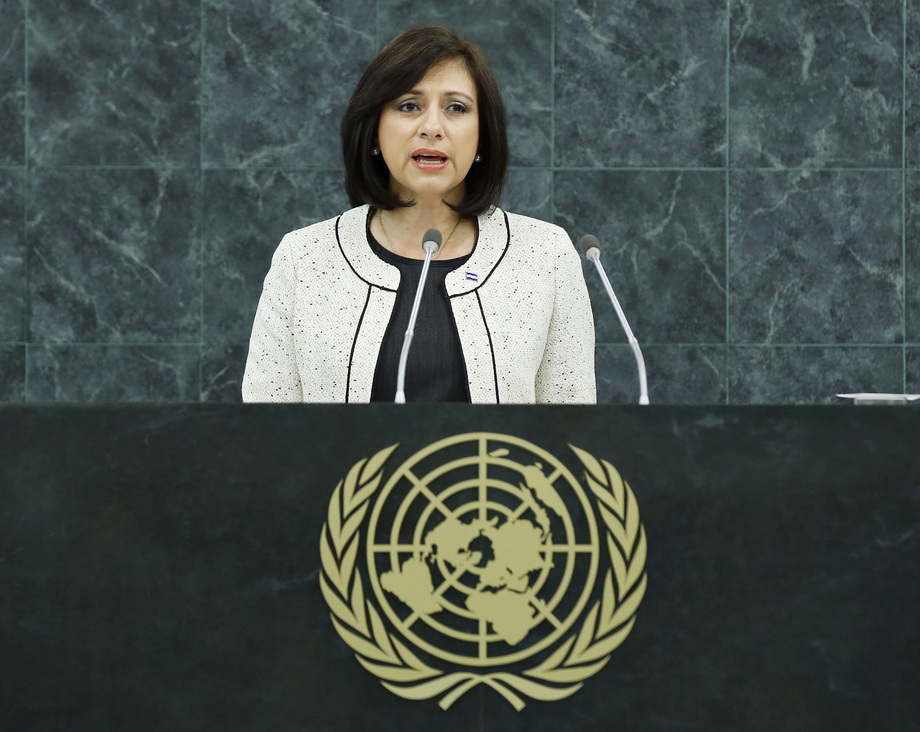 MARÍA ANTONIETA GUILLÉN DE BOGRÁN, Vice President of Honduras, said that her country had successfully overcome the severe political crisis of 2009 through normalizing national security, securing ties of close cooperation with over 100 countries, and restoring confidence in the foreign credit market. Membership in major regional forums had also strengthened its energy sector. In line with a process to “heal the wounds”, Honduras adopted a long-term plan on economic growth and social equality. Government, business unions, workers, farmers and civil society were working together for the same results, she said. To further strengthen democratic process, she pointed to a Government initiative to hand over to the incoming Administration a set of principles aimed at consolidating social policy and guaranteeing sustainability of social institutions. Honduras was victim of attacks from foreign aggressors, she said, referring to drug trafficking. Noting a reduction in the number of homicides, she said the Government had undertaken reform of the security and justice sectors, adopted a tax to strengthen citizen safety, provided training to defence services and enacted policies to protect youth from falling prey to drug crime. Although halting the violence seemed like a positive sign, it was insufficient given the high level of crime Honduras experienced. The future Government would have to “stay the course with a firm hand” and continue to strengthen security and justice institutions. Effectively combating global crime required international and regional efforts as they were more decisive and effective in enforcing the principle of shared but differentiated responsibility between countries that were producers and those that were consumers of drugs. On human rights, she noted that her Government had established new sectors that addressed justice, torture and cruel treatment and trafficking of persons. It had also ensured the signing of incoming Presidents of a pact on human rights. On the Millennium Development Goals, Honduras had made considerable progress in the food security sector with major efforts undertaken to eradicate hunger through a number of programmes. Noting the multidimensional aspect of the food security problem, she pointed out that between 2010 and 2012, her Administration reduced undernourishment by 21 per cent. To ensure that progress was sustained, she stressed the need for enhanced partnership within the alliance of the “dry corridor”, which would aim at eradicating poverty and hunger in its most vulnerable areas. On education, she noted an increase in enrolment in pre-schools. Classrooms must never be closed, she stressed, noting the increase in the number of school days and greater quality of education. She mentioned programmes enacted on gender equality and reducing child mortality and an immunization programme that had reached more than 90 per cent of those under the age of two. On maritime space in the Gulf of Fonseca, which Honduras shared with El Salvador and Nicaragua, she underscored the need for balance between conservation and development. Since October 2012, Honduras had been requesting that the Security Council provide all necessary support to resolve the matter. She reiterated the importance for coastal States to respect the decision made by the International Court of Justice to avoid any territorial and maritime claims that would move away from the goal of making the Pacific Ocean, as well as the Gulf, productive and prosperous.