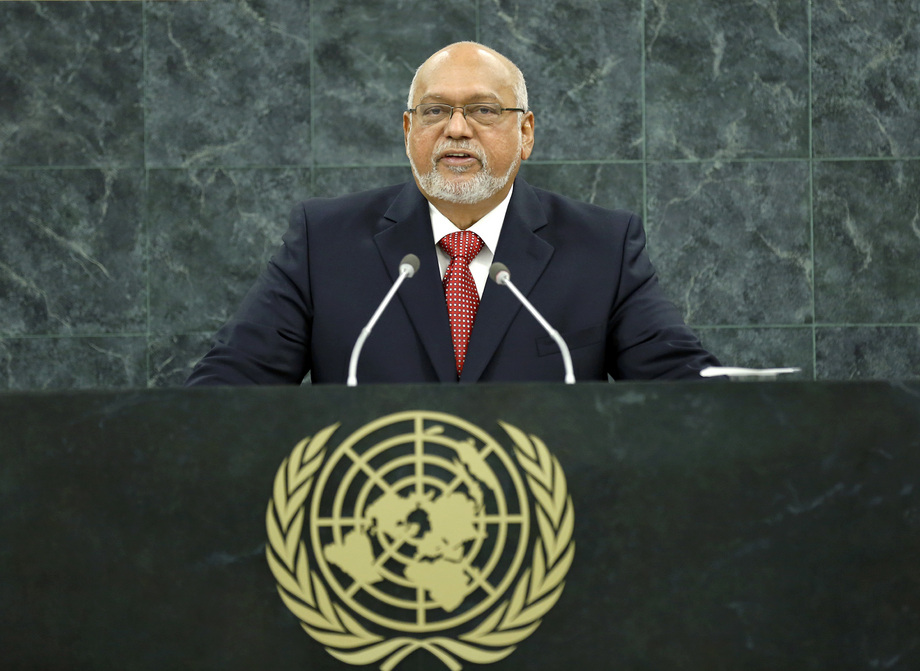 DONALD RABINDRANAUTH RAMOTAR, President of Guyana, expressed his deepest condolences to Kenya over the recent terrorist attacks there, before pointing out that the international community faced several challenges which threatened the hard-earned socioeconomic gains of the last decade. At the very core of those issues was a need to address inequality, he said, pointing out that income distribution continued to be skewed in favour of rich nations, and rich people, in all countries. The gap between the “haves and have-nots”, which had grown dangerously wider in recent years, was at the heart of many current conflicts, but that was not readily visible because the struggle for social and economic justice was often clouded by inter-ethnic, inter-religious, and other types of conflicts.

On Syria, he said it would be an illusion to believe that military intervention would bring peace. What was badly needed was a political dialogue between the parties concerned. Expressing support for the agreement between the Russian Federation and the United States to facilitate the destruction of Syria’s chemical weapons, he called on all nations in possession of such weapons to do the same. He said some of the forces fighting in Syria were terrorists. “They cannot be terrorists when they are fighting in Afghanistan and Iraq, but freedom fighters when fighting the Syrian Government,” he added. “A terrorist is a terrorist.”

Regarding the coup in Egypt, he said it was a blow against democracy that had led to violations of human rights and more social unrest, yet major Powers had chosen to refrain from condemning it. As for the conflict between Israel and the Palestinians, the latter had a right to their own independent and viable State, he emphasized. Turning to his own region, he condemned the United States’ blockade against Cuba, saying it imposed a needless burden on the island nation’s people. Regarding the Arms Trade Treaty, he said it was critical not only to the safety and security of the region’s citizens and their fight against transnational crime, but also to the very pursuit of sustainable development. The funnelling of guns was a menace to the Caribbean and must be curbed for the preservation of the region’s youth and future, he stressed, calling for the Treaty’s early entry into force.

Outlining various national accomplishments, he said 30 per cent of his country’s expenditure went to the social sector, contributing to the achievement of several Millennium Development Goals, including universal primary education. Guyana was also close to achieving universal secondary education and, according to the Food and Agriculture Organization (FAO), was one of the few countries to have slashed poverty by more than half while improving nutrition. However, the effects of the global financial crisis on the region had been devastating, he stressed.

As a middle-income country, Guyana was no longer entitled to concessionary financing, a situation he described as a recipe for reversing the gains of hard work, he said, calling for greater consideration of the region’s special vulnerabilities. A country “can see one hurricane wiping out its entire [gross domestic product]”, he added. Climate change had especially severe effects on small island developing States, he said, welcoming the designation of 2014 as the International Year of Small Island Developing States.