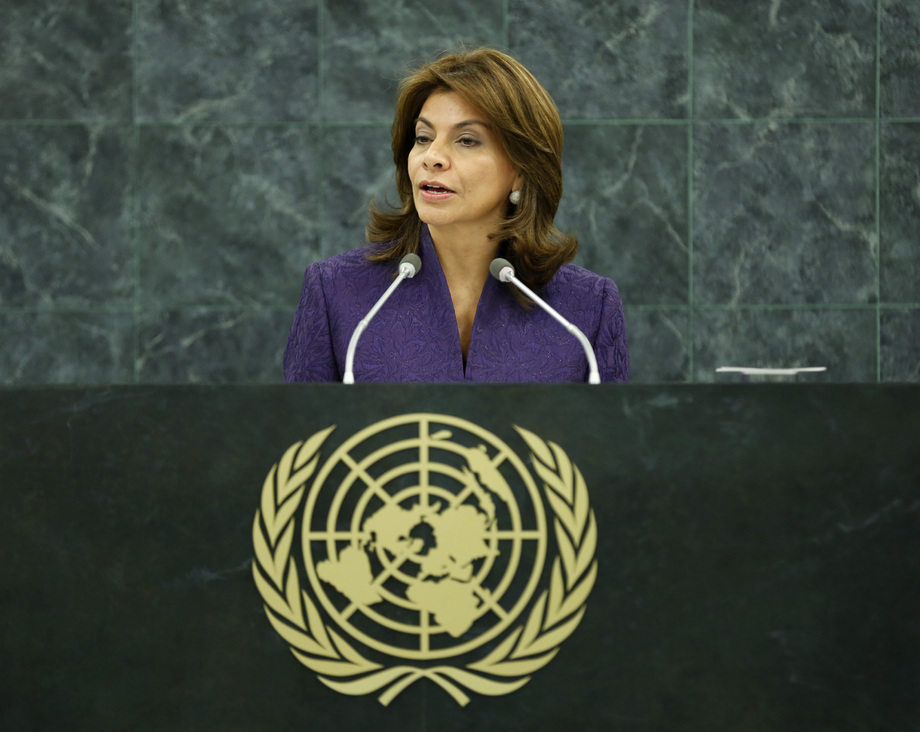 Laura Chinchilla Miranda, President of Costa Rica, remembered the crucial importance of the United Nations to conjoin, catalyse and protect the international multilateral structure and the rule of law, as well as to guide the international community in its search for solutions.  On 2 April, her country had ratified the Arms Trade Treaty, which had been followed by the unanimous ratification of a domestic law ensuring its implementation.  In the context of the high-level debate on nuclear disarmament, set for 26 September, she noted that Costa Rica had presided the working group to develop proposals to take forward multilateral negotiations leading to a world without nuclear weapons.

She said the tragedy of Syria had been a major source of suffering and concern, and, after a period of paralysis and confusion, she welcomed the approaching of a possible solution to the stalemate.  She stated:  “I raise our voice to demand that the Security Council act decisively to eliminate chemical weaponry in Syria, restrain violence, seek a negotiated and democratic solution to the conflict, and make accountable those responsible for the horrible crimes committed there.”  Costa Rica insisted that the Council refer the Syrian case to the International Criminal Court, and she again called on the five permanent members to refrain from exercising their veto in cases of crimes against humanity.

The Syrian tragedy, she said, reaffirmed the need to work decisively towards the organic application of the responsibility to protect, and she urged all Member States to join the initiative of Australia, Costa Rica, Denmark and Ghana to designate focal points for the prevention of atrocities.

Turning to sovereignty and territorial integrity, she recalled Nicaragua’s occupation of part of Costa Rica’s territory in October 2010, as well as the measures taken by the International Court of Justice, which, among other things, prohibited the presence of Nicaraguan personnel in the zone under dispute.  Nicaragua’s scorn for those measures demonstrated the urgent need to establish procedures to guarantee respect for the court’s decisions, and Costa Rica committed itself to that goal.  The Nicaraguan and Costa Rican people deserve to live in peace, but the Nicaraguan Government insists on preventing it.

Touching on a number of other matters of concern, she said Costa Rica joined the call of Mexico and Guatemala regarding drug trafficking and transnational organized crime to re-evaluate agreed international policies and look for more effective responses to the illegal drug trade. Crime rates in Costa Rica were currently the lowest in the region, she said, welcoming the Declaration of Antigua by the Organization of American States (OAS) as a first step to lead the international community towards holding, in 2016, a General Assembly special session on current policies and strategies to confront the global drug problem.