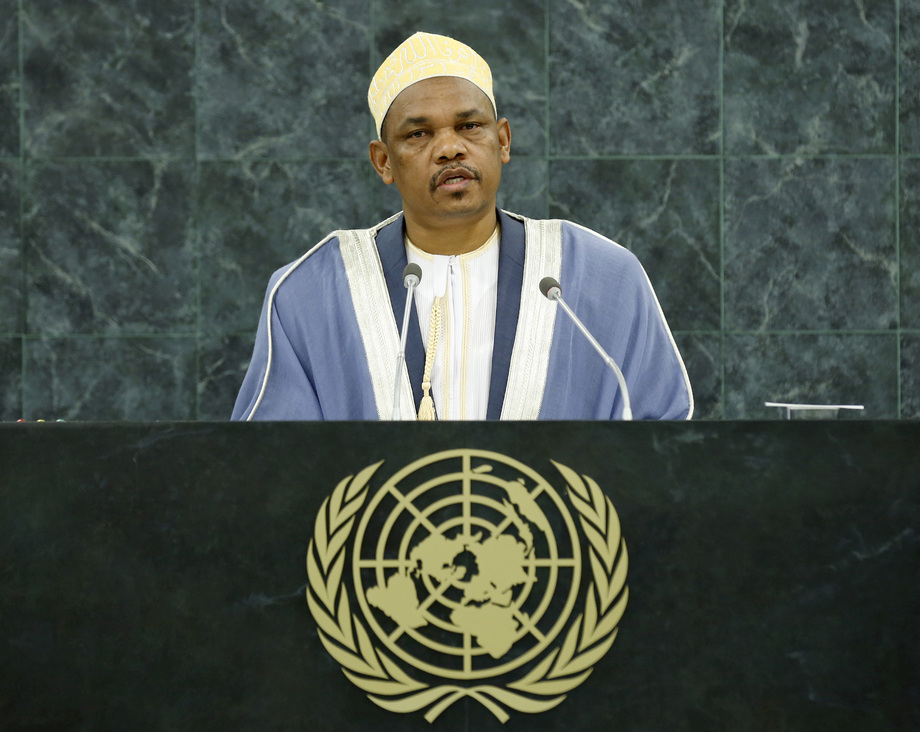 IKILILOU DHOININE, President of Comoros, firmly condemned terrorist attacks, including the recent one in Kenya, before emphasizing the vital need to find a solution to the Syrian crisis. Condemning the use of chemical weapons against innocent people, and the perpetrators of such horrible acts, he said it was also important to call attention to lesser known crises. He paid tribute to Member States that had supported national liberation movements and organizations, particularly in Africa, since the founding of the United Nations, but expressed regret that part of the Comoros territory remained under the domination of France, a permanent Security Council member, despite an unequivocal vote in favour of independence for some of the archipelago’s islands.

He went on to cite various United Nations resolutions adopted since 1960 in that regard, including Assembly resolution 3385 of 12 November 1975, which reaffirmed the need to respect the unity and territorial integrity of the Comoros archipelago, comprising the islands of Anjouan, Grand Comore, Mayotte and Moheli. He asked fellow leaders whether they could imagine the frustration of a Head of State who must deal with such a dramatic situation every day. What serious error had the people of Comoros committed to be treated in such a way, and why must they constantly justify their right to their own history, geography and culture? It was difficult to comprehend the argument that such treatment was valid because some Comorians wished to remain under colonial rule, he said.

Since 6 July 1975, when Comoros had chosen sovereignty and declared independence, the country had called in vain for the application of international law, he continued. The ability of the archipelago’s people to move from one island to another, an inalienable right, was impeded by the French system established in 1944, which required Comorians to obtain a visa to move between Mayotte and the other three islands. That system had led to the deaths of more than 10,000 Comorians, he said, describing the waters separating Mayotte from the other islands as the world’s largest marine cemetery.

All previous Presidents had pursued negotiations with France in order to end the territorial dispute, in line with international law, he said. Nevertheless, France’s stance had remained unchanged for 38 years. He said that, after an initial recent meeting with his French counterpart in Kinshasa, on the margins of the Francophonie Summit, he had seen that the French authorities were finally ready to find a solution. France was also ready to assume its historical role with respect to international law, and what it had just done for Mali was the most eloquent example of that. Comoros thanked the French authorities for having made the critical decision of ensuring that the armed forces of Chad and some West African countries joined France in helping to restore Mali’s territorial integrity, he said, expressing hope that his own country would be able to do the same.

He welcomed his French counterpart’s invitation to discuss bilateral relations, particularly on the question of Mayotte, which had led to their signing the Paris Declaration. He also thanked the Chairperson of the African Union Commission for her support in that matter. Calling upon the international community and the Secretary-General to support such negotiations, he said the question of Mayotte would remain on the agenda every year until a lasting settlement was found to the issue of Comoros sovereignty. He also called for support from the United Nations, African Union, International Organization of La Francophonie, League of Arab States, Organization of Islamic Cooperation, Non-Aligned Movement and the Indian Ocean Commission.