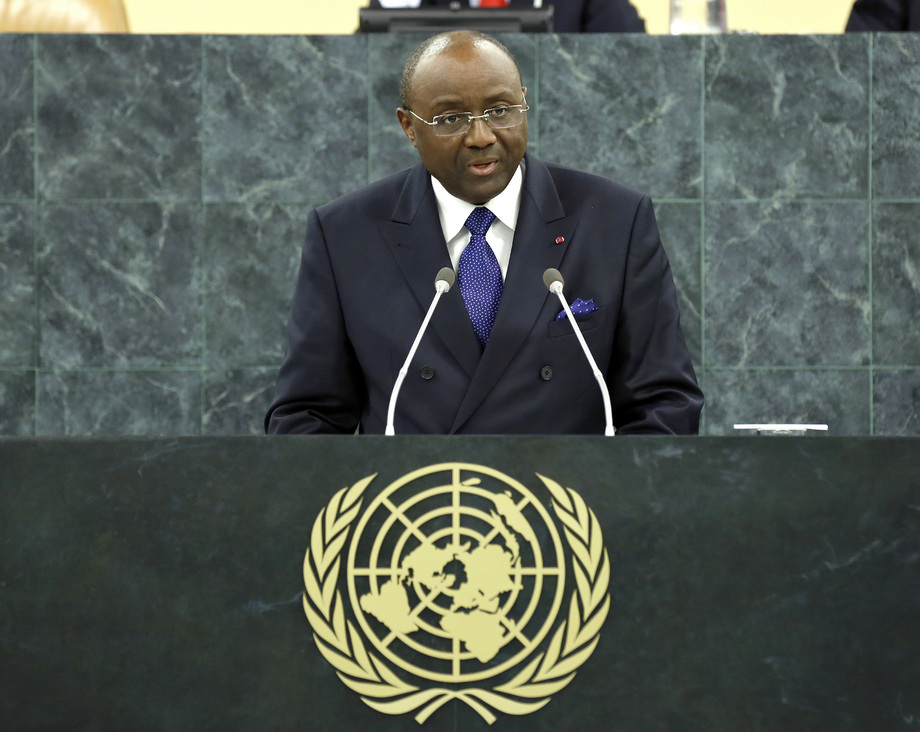 PIERRE MOUKOKO MBONJO, Minister for Foreign Affairs of Cameroon, spoke on behalf of President Paul Biya, firmly condemning the terrorist attack in Kenya. He commended the end of the crisis in Mali and the subsequent democratic election of Malian President Boubacar Keita, which was a milestone in peacebuilding and reconciliation. Cameroon, he said, would achieve only some of the Millennium Development Goals by 2015, adding it had made progress in health care, which was a catalyst for socioeconomic development and poverty reduction. He stated that Cameroon was committed to fighting the HIV/AIDS pandemic, noting that it had allocated substantial resources, distributed free antiretroviral therapy and instituted programmes to prevent mother-to-child transmission. The HIV infection rate, he said, had fallen more than half from 10.5 per cent in 2000 to 4.3 per cent in 2012. He said that to achieve the Millennium target of universal access to primary education, the Government had expanded school infrastructure and lowered the student-to-teacher ratio. Today, Cameroon had one of the highest literacy rates in sub-Saharan Africa, he noted.

It was vital to set the stage for the post-2015 development agenda, drawing on lessons learned from the Millennium Development Goals, he said. As nations grappling with climate change, the financial crisis and food insecurity had difficulty in meeting the Goals, he said it was necessary to look at whether they had been too ambitious, their target date set too early, and if sufficient resources had been made available for implementation. In Cameroon, consultations had been held to enable civil society to issue recommendations for the post-Millennium Development Goals framework, he said. Future goals, he added, should particularly focus on job creation as an economic driver. He remarked that in 2010 Cameroon crafted a strategic document on growth and employment, aimed at reducing poverty and making tangible improvements in people’s living conditions, particularly that of women and youth. He said that the post-2015 framework also must address environmental concerns and that there must be better oversight of the financial and raw materials markets in order to enable countries to better resist external shocks. He suggested setting up a support fund, as well as regular regional and global follow-up mechanisms for each new goal set.

Turning to the state of affairs in Africa, he expressed concern over the situation in the Central African Republic, eastern Democratic Republic of the Congo and North Africa. To help alleviate the worst humanitarian crisis in the Central African Republic’s history, he said Cameroon and other States of the Economic Community of Central African States had sent troops to stabilize the situation on the ground. He supported Central Africa’s efforts to operationalize a support mission and mobilize humanitarian aid for the Central African Republic. He said that recurrent acts of banditry such as kidnappings of civilians and maritime piracy were growing at an alarming rate, noting that in 2012, the number of maritime piracy attacks in West Africa had surpassed the number of attacks in the Gulf of Eden and the Indian Ocean. To address the problem, he said Cameroon’s Government in June 2013 sponsored in Yaounde a joint summit of the Economic Community of Central African states, Economic Community of West African States and the Gulf of Guinea Commission. Those three institutions, he stated, decided to set up an interregional coordination centre in Cameroon to fight piracy. He concluded his remarks by calling for the support of all partners.