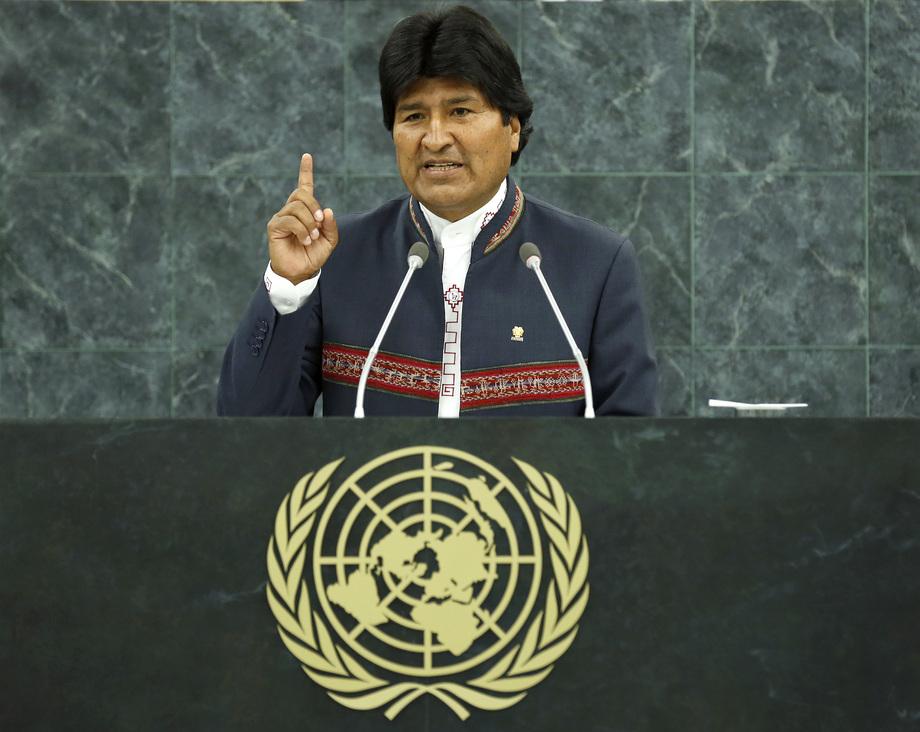 Evo Morales AYma, President of Bolivia, highlighted his country’s progress towards achieving the Millennium Development Goals, noting that in the eight years of his presidency, he had seen economic growth increase by 4.8 per cent. Bolivia had successfully reduced extreme poverty and, as a result, 1 million Bolivians had entered the middle class. It had also reduced the undernourishment of children under the age of five, and the United Nations Educational, Scientific and Cultural Organization (UNESCO) had declared the country illiteracy-free. There had also been a decrease in mother and child mortality, he said. A programme called “My Water” had been launched to provide access to potable water for provinces without it. He said all that progress was due to the fact that Bolivia was no longer subjected to the “North American empire”, or to blackmail aimed at forcing it to give up its resources to international private companies. “When we feed ourselves politically and economically, we do better,” he added. Gas and oil were now the property of Bolivians, whereas in the past, it had been claimed that Bolivians owned only underground resources. The same resources above ground had belonged to so-called “bearers of the titles”, which amounted to robbery. Since nationalizing its natural resources, Bolivia’s economic situation had started to improve. Turning to his country’s ongoing dispute with Chile, he said it had been submitted to the International Court of Justice. Bolivia had filed the proceedings in relation to Chile’s obligation to negotiate an agreement granting fully sovereign access to the Pacific Ocean. The country had provided many examples of Chile’s contradictory stance on that question as well as its failure to respect its international commitments. On another topic, he said much had been heard about democracy, respect and social justice during the debate. “What justice are they talking about?” What democracy were they talking about when countries like the United States could spy even on their democratic allies? There was much arrogance towards the rest of humanity on the part of the United States, he said. What peace could be discussed when there were so many unemployed in that country and yet billions of dollars went to military expenditure every year? The United States acted as if they were masters of the world, but they had not signed even basic multilateral instruments, he continued. Terrorism was not to be fought with more military spending but with more democracy, more social justice and more education. “Who benefits from the wars?” he asked. “Whose hands do natural resources of a country end up in, its citizens or international companies?” While Bolivia certainly disagreed with the use of chemical weapons, which country had the biggest nuclear arsenal? he asked.

The representative of Bolivia said Libya’s statement was “absurd” and “unrealistic”, and in violation of the Assembly’s rules and procedures.  Bolivia would condemn imperialistic attacks anywhere in the world, continuing to draw attention to the true motives of such attacks — the appropriation of natural resources and the pursuit of geostrategic interests.  There could be no diversion of attention from the main issue, which was the ongoing struggle for the values and principles of the United Nations.  There could be no more unilateral attacks, violations of international law or looting of people’s natural resources, he emphasized, saying he would take any legal action within his power to respond to the words of the Libyan representative in order to ensure a public response to his shameless lies.

The representative of Bolivia expressed regret over the use of the Assembly as a forum for denigration of a State.  Attention was being drawn away from the central theme raised by the President’s statement, he said, adding that he supported every word of it.