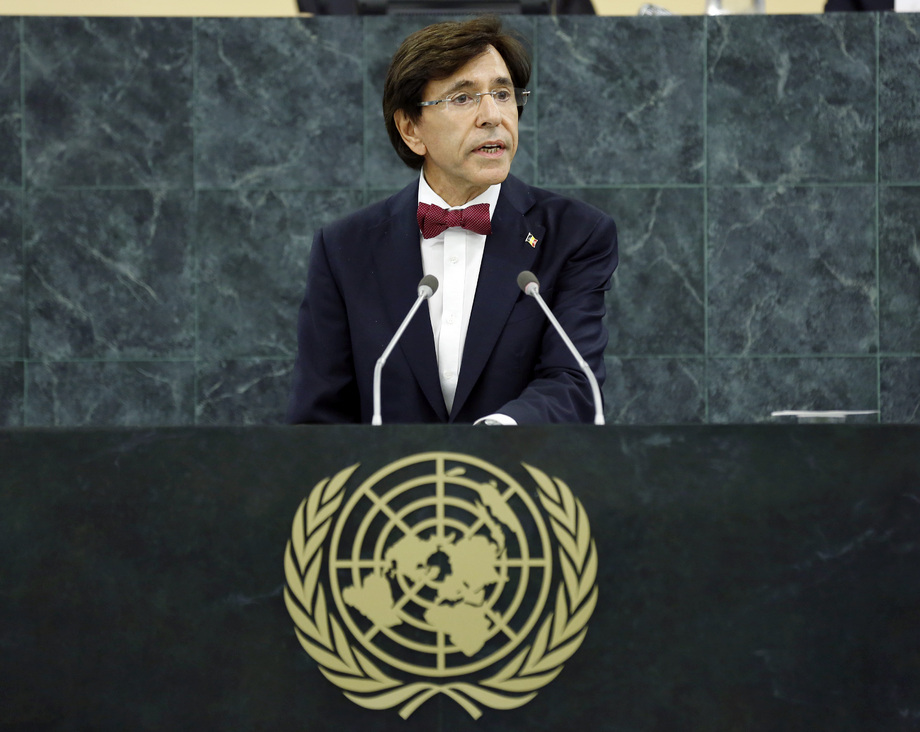 ELIO DI RUPO, Prime Minister of Belgium, said that it was in his country that chemical weapons had been used for the first time during the First World War. The world, however, had made the same mistake, as the Syria crisis had shown. Since his last address to the General Assembly, he said that he wondered how many hopes had been fulfilled, but also how many atrocities had been committed over the course of those past 12 months. He thought that world leaders had to be as courageous as those women and men who were fighting everywhere in the streets for their dignity. “There must be a veto against tyranny,” he added. The only possible way forward was multilateralism. Belgium, in fact, was the fifteenth contributor to the budget of the United Nations. The “responsibility to protect” was crucial, that is why his country had convened in 2014 a conference in Brussels on the prevention of genocide, he added.

“We obtain results when we act together,” he continued, but results were not always permanent: in order to be steady, peace must be nurtured. He welcomed the efforts undertaken in the Democratic Republic of the Congo, such as the strengthening of the mandate of the United Nations Organization Stabilization Mission in the Democratic Republic of the Congo (MONUSCO), through which the Security Council and the Secretary-General had shown their commitment to protect civilians, to reduce the suffering of the Congolese people after years of massacres, mass rapes and the recruitment of child soldiers by armed groups. He said that to stabilize the region as a whole, territorial integrity was crucial. All foreign interference in the country must come to an end, he added, and structural reforms must be initiated to establish the rule of law and the well-being of the Congolese people.

He said that “declaring wars is easier than building bridges”, and that “building walls is easier than building schools and hospitals”. Expressing his support to the endeavours of the Joint Special Representative of the United Nations and the League of Arab States for Syria, Lakhdar Brahimi, to bring the parties to the negotiation table, he strongly believed that any solution to this kind of conflict must be political, implemented through the law. It was the law that organized human society, he added, and protected the vulnerable. It was the law that was essential to regulate life, as without it, human beings were left exposed to other fellow human beings. It was the law that avoided impunity and enabled people to emerge from dictatorships and oppression. It was the law that guaranteed freedoms like the right of women to study, the right to choose a religion or the right to be in a homosexual partnership, among others. Belgium guaranteed all these fundamental freedoms, he said. Turning to the Palestinian question, his country welcomed the resumption of the negotiations and supported the two-State solution. It, however, stood firmly against the establishment of settlements.

He welcomed the United Nations initiative to convene in New York a forum on sustainable development. All countries, one way or another, were affected by the depletion of natural resources, he said, so “we must remain mobilized”. He said that his country hoped the work of the post-2015 development agenda could be combined with the goals of Rio+20 in a single negotiation framework.

Mentioning espionage and cybercrime, he expressed his support to the question posed by Dilma Rousseff, President of Brazil: In the name of security and the fight to terrorism, was it possible to flout the right to the protection of private life everywhere, but particularly on the Internet? A framework needed to be created, so that the web could remain an instrument of freedom, where everybody could securely communicate. Finally, he reminded that, in 2014, his country would solemnly commemorate the centenary of the First World War, to honour the youth of 50 countries who had died to save Belgium and to educate the youth of today to become militants of peace.