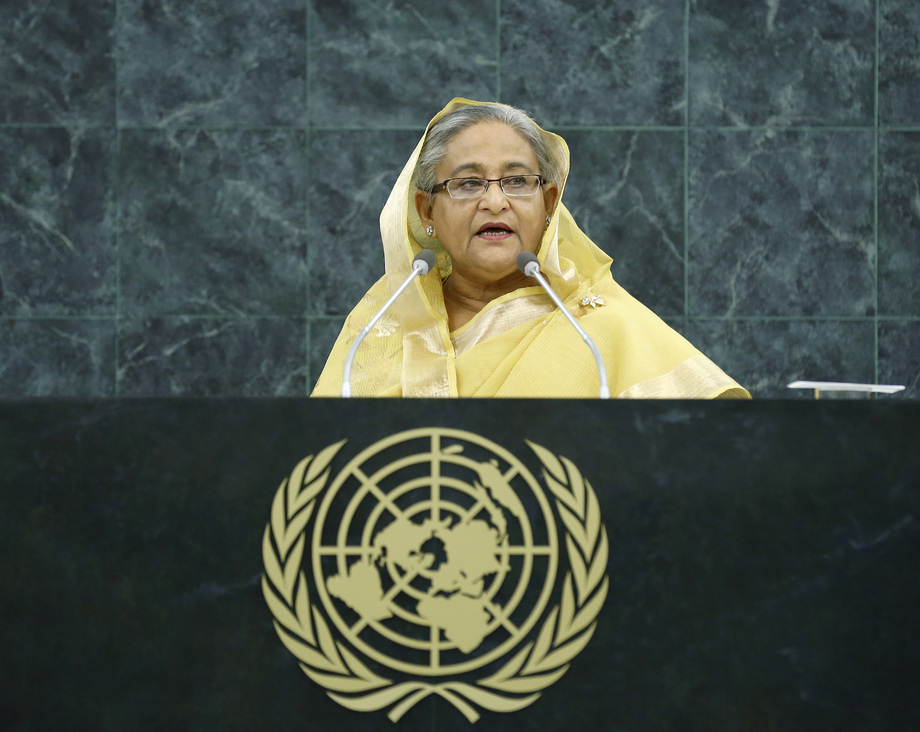 SHEIKH HASINA, Prime Minister of Bangladesh, said rapid technological innovation was transforming the world and causing conflict in and among States, with repercussions for the poor and most vulnerable. She hoped this year’s Assembly would help design a pragmatic strategy for the Millennium Development Goals. Past experience would be useful in shaping the post-2015 development agenda, she said. Bangladesh had submitted a draft of that agenda comprising the global environmental and economic resources for achieving it. The Dakar Declaration placed the human individual at the centre of the development agenda. Bangladesh — having slashed poverty from 56 per cent in 1991 to 26 per cent today — aimed to become a middle-income country by 2021. Remittances, foreign currency reserves and power production capacity had risen significantly over the same period. She noted that Bangladesh was known as the “standard bearer” of South Asia due largely to implementation of a people-centred development model.

Real national development could only be achieved through education and women’s empowerment, she said. Bangladesh’s education and women’s empowerment policies had led to significant gains, with girls’ school enrolment on the rise and women occupying posts in the highest levels of Government. She cited social policies such as monthly pensions, food programmes for rural people, and aid to people with disabilities, among others, that had improved people’s well-being. Due to global warming and sea-level rise, Bangladesh faced a calamitous future, adding that a 1° C temperature rise would result in vast numbers of climate migrants in Bangladesh. She called for creation of a climate change trust fund and a climate change resilience fund for least developed countries. She thanked the United Nations for producing a website and radio programmes in Bangla.

Her Government had set up two war crimes tribunals, in line with the 1973 International Crimes Tribunal Act, to investigate and try suspects deemed responsible for committing genocide, war crimes and crimes against humanity in Bangladesh during its liberation war in 1971, she said. She urged the international community to support that process. Her Government was entrenching democracy to defeat terrorism. It had strengthened its elections commission. Bangladesh had amply proven that it could hold free, fair and credible elections. Bangladesh aimed to cement peace by resolving outstanding issues and maintaining good relations with its neighbours.

Bangladesh was a top contributor to United Nations peacekeeping operations and Vice Chair of the Peacebuilding Commission, she said. During her first presidential term, Bangladesh ratified the Comprehensive Nuclear-Test-Ban Treaty and the Mine Ban Treaty and she had signed the Arms Trade Treaty. Bangladesh had acceded to remaining instruments on close combat weapons. The promotion of intercultural and interfaith dialogue was essential for peace and development. She had proposed to the United Nations Educational, Scientific and Cultural Organization (UNESCO) and at the Assembly’s High-level Dialogue on Culture and Development to include culture and development in the post-2015 development agenda.

For Bangladesh to achieve the Millennium targets by 2015 and beyond, development partners must continue contributing 0.7 per cent of their gross domestic product (GDP) for ODA (Official Development Assistance), she said. She urged partners to give least developed countries duty-free and quota-free access to markets, an equal voice in the Bretton Woods institutions and international financial institutions, and free movement of labour. Implementation of mode 4 of the General Agreement on Tariffs and Trade was also important for both sending and receiving countries. She stressed the need for unity in building a common development agenda in which no person or nation was left behind. A strong judiciary was vital to remove threats to freedom, democracy, human rights and the environment.