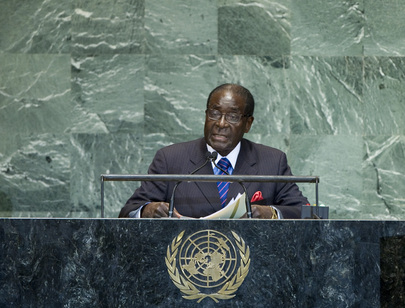 ROBERT GABRIEL MUGABE, President of Zimbabwe, calling the death of Muammar Qadhafi a tragic loss for Africa, deplored NATO for having sought the authority of the Security Council to operate in Libya under the guise of protecting civilians, only to turn its mission into a brutal hunt for Qadhafi and his family. He also expressed condemnation for the recent death of United States Ambassador Chris Stevens in Libya.

There was an increasing trend by NATO States, inspired by the arrogant belief that they were the most powerful, to use unilateral military hegemony, which was the very antithesis of the basic principles of the United Nations, he said. In the case of Libya, the African Union and its peacemaking role was “defied, ignored and humiliated”. He urged the international community to collectively “nip that dangerous and unwelcome aggressive development before it festered” and praised the Assembly President’s theme for the current session because “the warmongers of our world have done us enough harm”. Wherever they had imposed themselves, chaos in place of peace had been the result, he said, adding that the situation created by the Bush-Blair illegal campaign of aggression against Iraq had worsened the Sunni-Shiite conflict, “let alone the disastrous economic consequences of that unlawful invasion”. Libya had been made equally unstable, following NATO’s deceitful intervention under the sham cover of Chapter VII of the Charter of the United Nations and the phoney principle of the responsibility to protect.

Zimbabwe firmly believed in the peaceful settlement of disputes between and among States, in a manner that was consistent with the principles and purposes of the United Nations. In the maintenance of international peace and security, much more needed to be done to prevent conflicts from erupting in the first place, and to prevent relapses once a situation had been stabilized. It was important to address their underlying cause and pursue more proactively a comprehensive approach focused on conflict prevention, peacebuilding, peace-sustenance and development, he said, while expressing regret that the United Nations Charter as it related to peaceful settlement of disputes had been ignored by the Security Council on occasion. In contrast there seemed to be an insatiable appetite for war, embargos, sanctions and other punitive actions, he pointed out, even on matters better resolved through multilateral cooperation.

Troubled by clear and growing evidence that the concept of “responsibility to protect” had begun to be applied and seriously abused, undermining the sovereignty of States, he stressed that “for the international community to successfully deal with global economic, social, security and environmental challenges, the existence of international institutions to handle them and a culture of genuine multilateralism are critical”. Speaking on Assembly reform, he emphasized the need to reach consensus on measures to revitalize the most representative body of the United Nations and expressed deep concern that the mandate powers and jurisdiction of the Assembly were shrinking as a consequence of the Security Council “gradually encroaching upon the Assembly’s area of competence”. That undermined the overall effectiveness of the United Nations, he said, adding that the Assembly must remain the main deliberative, policymaking body of the United Nations.

He also expressed support for the current intergovernmental negotiations on the reform and expansion of the Security Council, saying Zimbabwe stood by Africa’s demand for two permanent seats, complete with a veto, if the veto were to be retained, plus two additional non-permanent seats, as clearly articulated in the Ezulwini Consensus and the Sirte Declaration. “For how long […] will the international community continue to ignore the aspirations of a whole continent of 54 countries?” he asked. He condemned the economic sanctions imposed against Zimbabwe and reminded those who had maintained sanctions against it that there was international consensus, fully supported by the Southern African Development Community, the African Union, the Non-Aligned Movement and the rest of the progressive international community, on the immediate and unconditional lifting of those sanctions. Zimbabweans had suffered far too long under those completely illegal punitive measures, he said.