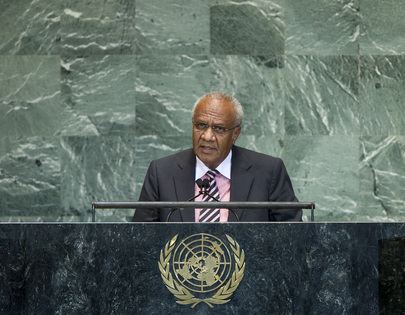 MELTEK SATO KILMAN LIVTUNVANU, Prime Minister of Vanuatu, said many of the now politically independent nations gathered for the general debate had a shared history with peoples whose larger political freedom was “still bound by the tentacles of imperialism and [colonialism]”. Indeed, for the world’s remaining colonized territories, the Assembly’s annual high-level debate represented a “pinnacle” they aspired to reach one day. For decades Vanuatu had called on the United Nations to strengthen its work towards full decolonization of territories still under administrative Powers, and reiterated that call, including on all free nations, to “complete the story of decolonization and close this chapter”. He also urged the United Nations to support the demands for French Polynesia’s right to self-determination and progress. In the same vein, negotiations for self-governance of the indigenous people of New Caledonia must continue, and he encouraged the parties to ensure that process stayed on track.

Turning to other issues, he noted his Government’s ongoing concern about the denial to countries of the right to exercise their inherent political freedom and cultural rights over their maritime territories. The 32-year dispute with France over Vanuatu’s two southern islands — Mathew and Hunter — “is a reminder that we must continue to uphold the notion that the rule of law should not be used as an instrument for powerful nations to coerce the weak and small”. He noted that the Governments of Vanuatu and France had met recently in Paris to begin a dialogue on the dispute, and he thanked the French authorities for “finally opening the door” so that negotiations could start.

He said that Vanuatu was surrounded by the vast Pacific Ocean and was exposed to the “notorious” illegal shipment and trade of arms. That issue had not received adequate attention and, as a result, such shipment lacked proper and coherent regulation and was, therefore, responsible for the loss of countless lives. He joined other countries in urging the United Nations to step up effort to conclude an arms trade treaty, which would provide greater security and controls on such illegal shipments. On other matters of concern for island nations, he recalled that Vanuatu had consistently argued that mechanisms and criteria for “graduating” such countries from least developed country status must recognize their inherent and permanent vulnerabilities.

Indeed, it was unrealistic for the United Nations to make projections without taking such matters into consideration. To that end, he noted that on the 2011 World Risk Report, Vanuatu had scored highest as the country with the greatest disaster risk, due to its high exposure and weak coping capacities. As such, he invited members of the third triennial review of the least developed country category to visit his nation to establish first-hand information prior to moving forward with the graduation process in 2013.

He went on to stress that Vanuatu was among many countries in the region being negatively impacted by climate change, including coastal erosion, coral bleaching and ocean acidification. Beyond climate impacts, there was a need to consider the potential for irrevocable damage that would be wrought on marine environments by pollution, and the projected increase in maritime traffic was only going to make matters worse. Vanuatu, therefore, urged all remaining States that had not done so to ratify the London Convention on the Prevention of Marine Pollution and its Protocol. Those countries were also urged to put in place and enforce relevant legal measures.