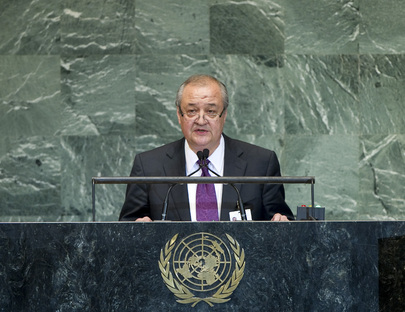 ABDULAZIZ KAMILOW, Minister for Foreign Affairs of Uzbekistan, stressed the need for “unconventional” and “unordinary” decisions to overcome crisis situations in a time of globalization and rapid change. In Afghanistan, tough problems might surface after the forthcoming drawdown of the International Security Assistance Force (ISAF) by late 2014 and the transfer of responsibility for the country’s stability to the newly created Afghan National Security Forces. “Such development of events may lead to the rise of a stand-off between confronting forces in Afghanistan itself and around it, the growth of extremism and radicalism, a further surge of drug trafficking and aggravation of tension in the whole region,” he warned.

On the worsening global ecological situation, he said that in Central Asia, the Amudarya and Syrdarya rivers were the main sources of water, and the lives of millions of people in their vicinity must be considered, in line with universally recognized norms of international law stipulated in the 1992 United Nations Convention on the Protection and Use of Transboundary Watercourses and International Lakes, and the 1997 Convention on the Law of Non-navigational Uses of International Watercourses. All projects to construct hydropower facilities in the upper reaches of those rivers must be subject to authoritative international appraisal, under United Nations auspices, and obligatorily harmonized with lower-stream countries, he stressed.

Emphasizing also that his country remained committed to preserving peace, stability and security in the region, he said the Government’s Concept of Foreign Policy stipulated that it reserve the right to enter into alliances, join or leave commonwealths and other inter-State establishments. The Government conducted a peace-loving policy, did not participate in military-political blocs, and reserved the right to leave any inter-State grouping in the event of its transformation into a military-political bloc, he said. Uzbekistan’s Armed Forces would not participate in military operations abroad, and the problems of Central Asia must be addressed by countries of the region without interference by external Powers, he said.